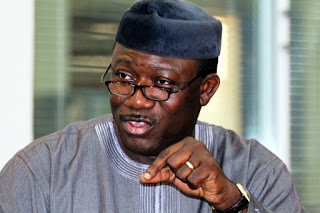 The Ekiti State House of Assembly has given the Economic and Financial Crimes Commission, EFCC, 21-day ultimatum to commence investigation into the allegation of N40 billion fraud made against the immediate past governor of the state and Minister of Mines and Steel Development, Kayode Fayemi and others, or face legal action.

The lawmakers accused the anti-corruption commission of compromise.

The House of Assembly, in a letter reminding the EFCC of the petition it submitted to the commission on October 27, 2016, said; “should the EFCC fail, refuse and or neglect to act on this petition within 21 days of receipt of this letter of reminder; we shall have no option than to institute legal action against you. Consequently, we shall be asking for an order of mandamus compelling you to perform your duties according to the 1999 Constitution of the Federal Republic of Nigeria (as amended) and the EFCC Act 2004.”

The house had submitted a petition, dated October 24, 2016 and signed by the Speaker, Kolawole Oluwawole, to the EFCC in Abuja on October 27, 2016, complaining of fraudulent practices against Mr. Fayemi, Dapo Kolawole, Yemi Adaramodu, Abiodun Oyebanji, Oyelade (CASA Nig Ltd), Bayo Kelekun and others.

However, more than three months after submitting the petition with relevant documents, the EFCC has not acted on it.

The letter of reminder, also signed by the Speaker and submitted by the Deputy Speaker, Segun Adewumi, and Chairman of the House Committee on Information, Samuel Omotoso, read; “We write to remind you of our petition dated 24th October 2016, which was submitted and duly received in your office on 27th October 2016.

“Three months after the petition was submitted, you have refused, and or neglected to act on it.

“This is at variance with the speed and swiftness with which you have acted on other petitions, especially those involving members of the Peoples Democratic Party (PDP), and this is confirming the general belief that you have been forbidden to act on any complaint against functionaries of the APC led government.

“Even though we have closed our ears to insinuations that your office is under a very strong influence to sweep under the carpet, any complaint that is made against Dr Kayode Fayemi and other top functionaries of the federal government, your refusal to act on our
petition, three months after it was submitted is making us to think otherwise.

“Therefore, in view of the need for an all-inclusive anti-corruption fight, we implore that you direct thorough investigation into the alleged fraudulent practices enumerated in our complaint dated October 24, 2016 (See attached) with a view to bringing anyone fund culpable to justice.

“We again attach herewith copies of relevant documents submitted with the petition and hope that this time around; you will not shy away from your responsibility this time around.

“However, should you fail, refuse and or neglect to act on this petition within 21 days of receipt of this letter of reminder; we shall have no option than to institute legal action against you.

Consequently, we shall be asking for an order of mandamus compelling you to perform your duties according to the 1999 Constitution of the Federal Republic of Nigeria (as amended) and the EFCC Act 2004.”

Speaking to journalists after submitting the reminder, Mr. Omotoso, who was flanked by Mr. Adewumi said the APC led federal government was fighting corruption involving opposition sulphuric acid while using cold water to fight the ones involving APC members and functionaries of the federal government.

He said the misappropriation of the SUBEB N852.9 million has done incalculable damage to education of children in Ekiti State, adding that the rights of Ekiti children to education was being violated with the collaboration of EFCC.

Mr. Omotoso called on Nigerians to help prevail on the EFCC to perform its duties without bias, saying; “Ekiti people are suffering from the consequences of the looting of their collective wealth by Dr Fayemi and others, and it is sad that EFCC appears to be in support of this criminal and inhuman act.” PT