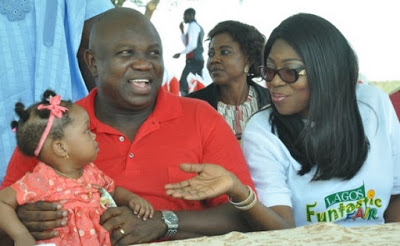 Wife of
Lagos State Governor, Mrs Bolanle Ambode on Thursday counselled students in the
State especially those seeking admission into tertiary institutions to put in
their best into academics, saying only seriousness could break all barriers on
the way of actualizing their dreams.

Speaking
while handing out award letters to two students who scaled the scholarship
interviews of her pet project, Hope For Women In Nigeria Initiative (HOFOWEM)
for the 2016/2017 academic year, Mrs. Ambode said coming from a humble
background was never a limitation for a serious student, but only hardwork
would pay off with outstanding success in future.

The award
letters were handed over to the successful students – Oluwadare Caroline
Omolola and Afolabi Olakunle Felix at HOFOWEM’s office in Oregun, Ikeja.
Mrs Ambode
said the lucky recipients of the HOFOWEM Scholarship Award and indeed all
students of tertiary institutions in the State must embrace academic excellence
and shun any short cut to success.
She said:
“You must note that coming from humble beginnings is not necessarily a
limitation to what you can achieve in life. The children of rich people are not
always the most brilliant or most successful. It is about how much of your time
and attention you invest in your academic work.”
Speaking
further, Mrs Ambode disclosed that the scholarship award was in line with
HOFOWEM’s ideal, to give hope to underprivileged children by encouraging their
educational pursuits, adding that it was instituted to sponsor brilliant
indigent students from Lagos State public secondary schools, to pursue first
degree courses in Nigeria.
She disclosed
that over 100 applications were received online and all candidates were
considered on an equal basis with no bias for background, but judged
independently on the basis of the applicant’s ability to meet the criteria
outlined under the terms and conditions of the award.
Besides,
the wife of the Governor said the successful candidates would enjoy the payment
of tuition fee, monthly maintenance allowance, book allowance and incidental
allowances for the period of their chosen courses.
She also
advised them to always put God first and shun bad vices capable of preventing
them from reaching their desired goals, while urging them to be good
ambassadors of HOFOWEM, by paying attention in class and moving with the right
peers, as any decline in their academic performance might result in forfeiture
of the scholarship.
Expressing
their joy, the beneficiaries, Miss Caroline Omolola Oluwadare and Master Felix
Olakunle Afolabi, both studying accountancy at the Federal University of
Agriculture, Abeokuta, and University of Lagos respectively, disclosed that it
was a dream come true.
The duo
whose results were among the best WAEC results in Lagos State could not hide
their joy, noting that they just tried their luck when they saw the advert in
the newspaper, adding that they never believed they could sail through
considering their very humble backgrounds, despite excellent performances at
WAEC and JAMB examinations.
They also
promised not to let her the wife of the Governor down over the gesture.
Also
responding, the parents of the beneficiary-students, Mr. & Mrs. Oluwadare
Issac and Mrs. Afolabi Christiana, thanked Mrs. Ambode for the humanitarian
gesture, praying copiously for the progress of the State and the foundation.
The
HOFOWEM Scholarship Award is planned to be an annual event to fund the tertiary
education of brilliant but indigent students from the state’s public secondary
schools.
Previous Post