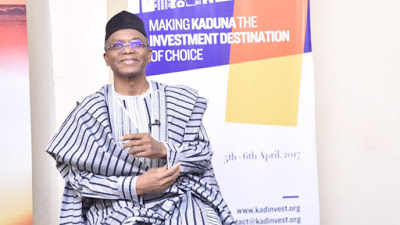 The House of Representatives on Tuesday said Gov. Nasir el-Rufai of Kaduna state published security budget of the state, not his security vote.

Chairman of the Committee on Media and Public Affairs, Rep. Abdulrazak Namdas, stated this in a news briefing in Abuja.

He said that el-Rufai was undermining and distracting the national assembly by his claims that the N115 billion in the legislature’s 2016 budget was for the 469 members.

According to him, the budget covers among others, salaries, allowances, expenditure and running cost of 469 members.

“Salaries and allowances of about 3, 000 legislative aides and salaries, allowances, equipment and maintenance of about 5, 000 staff in the bureaucracy of the national assembly,’’ Namdas said.

Namdas said “as a senior citizen, el-Rufai should not overheat the polity with tendentious and unfounded outbursts.

“We note that what Mallam el-Rufai published was the security budget of Kaduna state and not his security vote expenditure.

“We wish to advise the Kaduna state governor to concentrate on his efforts in governing Kaduna State and stop undermining and distracting the national assembly in playing its constitutionally assigned role in nation building.

“We are aware that there are serious security issues he should be grappling with in southern Kaduna and other governmental issues facing him,’’ Namdas said

According to him, the national assembly is not opaque and since the Constitution was amended in 2010, the legislature was put in a first line charge.

“Its budget became part of statutory transfers, together with the Judiciary, INEC and others.You cannot find details of the Budget of the Judiciary and INEC in the national budget.

“It exists elsewhere. Of course, from 1999 to 2010, the detail of the national assembly budget was contained in the national budget,” Namdas added.

He said that the Clerk of the National Assembly, Mr Mohammed Sani-Omolori, was directed to start publishing the budget from 2017. He said “to continue to repeat the same call made three days earlier smacks of propaganda and cheap blackmail.

“The Kaduna state governor chose to give headings of its budget on security related matters.Maybe, he will give further details of actual security expenditures at the appropriate time.

“It is most uncharitable to ignore the fact that the national assembly is an arm of government, not a department in the executive branch.

“The budget of so many agencies in the executive is higher than that of the National Assembly, an arm of government.

“Indeed, the National Assembly Budget is about two per cent of the national budget,” Namdas said.

He added that the Speaker of the House, Mr Yakubu Dogara, had directed that his six months’ pay slip, from October 2016 to March 2017, be published.