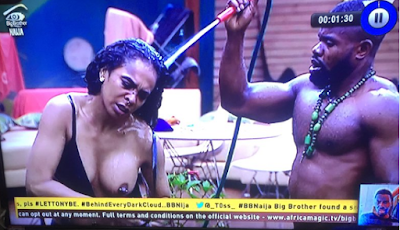 The Big Brother Nigeria reality show has come and gone. But here is what Reuben Abati has to say about it.

TBOSS and the other girls kissed and got groped by the boys on live
television putting their upbringing to shame. TBOSS, who claimed she
didn’t need the money even exposed her breasts on live television more
than once. I have seen better breasts TBOSS. I am not too sure those
private jet owners will be excited by your fluffy, South-looking,
slightly bigger than mangoes breasts. If the same men see bigger assets,
I mean, those interesting Ojiakor-like ones that look like papayas,
pineapples and watermelons, they will not send private jets, they will
deploy submarines and fighter jets! And that ‘s why you got N500k in the
end, way back behind Bisola with her hard facial features, and Efe
whose victory is based on poverty logistics and appeal. But I have no
doubt that TBOSS will end up doing better in the larger, outside market
than the other finalists, because even those who did not vote for her,
know in their hearts that she represents the message of the programme.