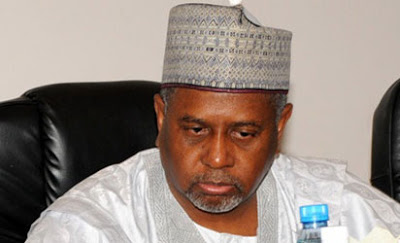 Abuja High Court has knocked off an operative of the Economic and
Financial Crimes Commission (EFCC), Mr. Michael Adariku who was billed
to testify against the former National Security Adviser Colonel Sambo
Dasuki Rtd in the charges brought against him by the Federal government.

Dasuki
through his counsel Mr. Joseph Daudu SAN had protested vehemently
against the inclusion of the EFCC operative on the ground that he was
not listed on the witnesses list as demanded by Section 397 of the
Administration of Criminal Justice Act 2015.

Daudu informed
Justice Baba Yusuf that Dasuki and four others who are being prosecuted
by government on alleged fraud had been ambushed by the introduction of a
witness not listed in the list.

The senior counsel insisted that
it is the requirement that all witnesses in a criminal matters must be
listed and that the list of the witnesses must be served on the
defendant to enable them know the background and be prepared to
cross-examine the witness.

In the instance case, Daudu submitted
that the defendants have been disadvantaged because they are not aware
of the witness and are not having his background upon which they can
effectively cross-examine him on his evidence in chief. He urged Justice
Yusuf to disallow the witness from giving evidence against Dasuki in
the interest of justice, fair play and equity.

Daudu further
contended that the court cannot use its discretion to overturn a
provision of the Administration of the Criminal Justice Act on the
ground that it is mandatory for the prosecution to make the witness
known to the defendants ahead of the trial.

However the Federal
government counsel, Mr. Rotimi Jacobs urged the court to discountenance
the objection of the ex-NSA to the EFCC operative as a witness. Adding
that the said operative had started giving evidence since January.

Jacob
insisted that it is too late in the day for the defendants to object or
to seek disqualification of a person who had already started giving
evidence simply because the name of the person doesn’t appear in the
witness list.

Besides,
the EFCC counsel submitted that the EFCC operative who led the team
that investigated the case against Dasuki and others had made his
statement since 2015 and served in the defendants without any
objections.

In the alternative, Jacob pleaded with the court to
allow him sometimes to put his house in order on the issue of the
witness list.

Other lawyers in the matter aligned themselves with
the position of Daudu that it is a clear law that anybody wishing to
testify in a criminal matter must be listed in the witness list.

Justice
Baba Yusuf after listening to both parties agreed with Dasuki that all
witnesses billed to testify against him must be listed in the witness
list and that a copy of the list must be made available to him in line
with provisions of the law and in the interest of justice and fairplay.

The judge ordered the EFCC operative who was already in the witness box to step-down.

Consequently the court adjourned the matter till May 16, 17, 18 2017 in agreement with lawyers involved in the matter.

Dasuki
is being tried along with Shuaibu Salisu former Director of Finance in
the Office of the National Security Adviser  (ONSA), Aminu Babakusa,
Acacia Holdings Limited and Reliance Referral Hospital Limited on
charges of corruption and money-laundering.