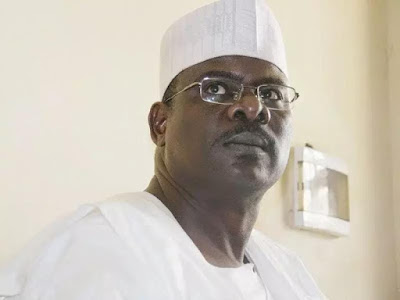 The upper legislative chamber suspended Ndume for six months based on the recommendation of its Ethics and Privileges Committee.

The committee made the recommendation after clearing Saraki and Melaye of allegations brought against them.

Ndume had moved a motion for his colleagues to be probed, arguing
that the reputation of the senate was at stake based on allegations
levelled against them.

While Saraki was accused of harassing Hameed Ali, Comptroller-General
of Customs, because the agency seized a vehicle belonging to him,
Melaye was said to have forged the certificate of his bachelors degree
from the Ahmadu Bello University (ABU), Zaria.

Both men denied the allegations, describing them as the handiwork of their detractors.

Speaking on Friday when he appeared as a guest on Politics Today, a
programme on Channels Television, Melaye said Ndume was not a victim of
witch-hunt.

“Senator Ndume is an experienced legislator, having been in the house
of representatives for two terms, and this being his second term in the
senate,” he said.

“I didn’t prophecy that he would be suspended, or did Bukola Saraki,
who was wrongly accused. We are not the ones who make up the senate.
Ndume should understand the workings of the National Assembly. The
senate is made up of 109 members.

“So, the decision to suspend Ndume was not that of Saraki or myself,
but the decision of the Nigerian senate after investigation by the
relevant committees… We have a very responsible senate president, a very
compassionate Nigerian who does not believe in witch-hunting.

“Already, there is a lot of pressure, and people are appealing to the
person of Bukola Saraki, and I can say on good authority that if Saraki
had presided over Ndume’s case, he may not have been suspended because
the senate president is a compassionate character. So, if Ndume shows
remorse, apologise to the senate, the Bukola Saraki that I know will
persuade members to either reduce his punishment or forgive him.”

He also disagreed with those who said Ndume was not given fair hearing.

“The senate has the capacity to suspend any erring senator, but what
we are saying here is very clear, due process was followed,” he said.

Melaye deliberately avoided questions on his claim of obtaining a
degree from Harvard degree, but chose to speak on other issues relating
to it.

“Even a mechanic or a plumber who undergoes apprenticeship is given a certificate… he graduates from his training,” he said.

“Anyone who attends a particular institution and is given a
certificate that he attended the programme, whether it is diploma, a
degree or PhD, as long as you have been given a certificate, you are a
graduate of that institution because you carry a certificate of that
institution.
“I am not going to be distracted.”

On the outrage of the public over the decision to suspend Ndume,
Melaye said lawyers and public commentators who have been “blabbing and
attacking the senate” cannot influence decisions taken by the senate.

“What the lawyers and many others who have been insulting and
assaulting the senate fail to understand is that they are not senators,”
he said.

“They are not part of our decision making. They do not know the debates that led to resolutions and opinions of the senate.

“So, they can only blab from outside… Unfortunately, they cannot
influence or destroy whatever we have done. If they want to understand
how resolutions are reached or understand the workings of the senate,
they would have to contest election and come into the senate. Some have
been speaking from the point of ignorance.”