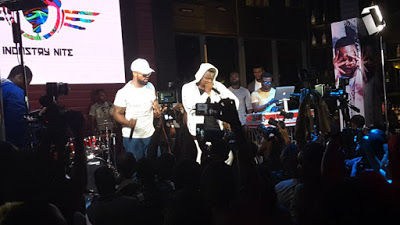 Iyanya was at his waist-twisting and torso-baring best on Wednesday night when he unveiled his new EP, Signature. He rolled back the years by performing live songs from the highly anticipated 7-track album on stage at Hard Rock Café, Oniru, Lagos in an Industry Night Special.

Dressed in a colourful camouflage-jacket, the Mavin Records artist mounted the stage at midnight and left no one in doubt inside the packed hall that he was well and truly back. Like an artist with a blank canvas spread out before him, Iyanya jumped, whined and crooned on the big stage fully aware that it was his night for the taking, and he owned it.

On the same night, his seven-track EP was released online to a global audience and has since dominated discussions on social media. Entitled ‘Signature,’ the body of work was produced by Mavin Records founder, Don Jazzy assisted by Altims and Baby Fresh.
Iyanya has been on a new lease of life since being backed by leading talent agency, Temple Management Company and Mavin Records. As if by celestial conspiracy, the Lagos weather even attested to Iyanya’s new found mojo as it gave way to heavy rainfall that poured while his performance continued safely inside the comfort of the walls of Hard Rock Cafe.

His performance was a medley of songs from his new EP such as Odoyewu, Hold On, Baby Answer, Not Forgotten, Celebrate, Nobody Has To Know, Bow For You and bonus track Up 2 Sumtin featuring Don Jazzy and Dr Sid.

Attesting to Iyanya’s new found vigour, Dr. Sid told the audience something many have never heard about Iyanya. The We Up crooner had joined Iyanya to perform the hit, Up 2 Sumtin. To buttress his point further, Dr. Sid went on to reveal how Iyanya is having a healthy influence on his Mavin Records colleagues.

“Iyanya is the best thing to happen to Mavin Records. He has made the rest of us look lazy with his work rate and I am not saying this because he is here. Iyanya has recorded over 50 songs in less than three months!” Dr. Sid exclaimed.

The most emotional moment of the night came when he performed a sober tune, Not Forgotten, the most introspective song off his EP and inarguably his most personal to date. For a moment, it seemed as if the singer would break down in tears.

At his request, Mavin Records producer, Altims played the piano in the background whilst Iyanya stood still, eyes shot and lost in his own thoughts for what seemed like forever. Iyanya is an orphan having lost his parents two years apart in 2008 and 2010.
For Iyanya’s Mavin Records colleagues, the night was a karaoke session as they sang ever song line-by-line with the musician. Iyanya would later describe the Don Jazzy founded group as a “happy company” and expressed how “blessed” he was to be a member of the biggest record label in Nigeria.

From a corner occupied by Mavin Records artistes, Don Jazzy danced and sang along happily through Iyanya’s performance. Virtually all the artistes on the label were present including Tiwa Savage, Korede Bello, D’Prince, Dr Sid, Dija, Reekado Banks, Poe and DNA Twins. Other artistes and celebrities who came to support Iyanya include Tekno, Sheyman, Reminisce, Uche Jombo and Ebi Onome among others.