Why Police May Declare Operators of Metro Park Wanted ……

How breach of contract over running of Pose Nite Club caused disaffection. 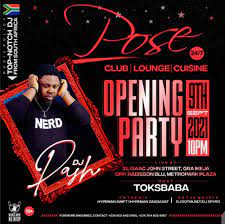 Mr Tokunbo Owolabani the Chief Operating Officer of Pose Nite Club has dragged his erstwhile partners Mr.Blaise Igbonwelundu and Mr.Hilary Igbonwelundu of BAR ONE AND RESTAURANTS to the Special Frauds Unit of the Nigerian Police for keeping fraudulent accounts and falsifying books and accounts statements of the company with an intention to defraud him of monies due him.

MetroNews checks revealed that Mr Tokunbo Owolabani entered into an agreement to set up and operate a nite club which he named Pose Nite Club in the premises of Metro Park located on Isaac John Street,Ikeja GRA. The agreement commenced from 15th July 2021 meant to end by 15th June 2023 with agreed terms and conditions.

To the charging of Mr Owolabani popularly known as Toks Baba a household name in club management and hospitality,the management agreement which saw both directors of Bar one and restaurants in
charge of all the money going in and out of the company without his knowledge discovered that the two directors were conniving to terminate the management contract and brought forward a falsified account of
sales and expenses.

A forensic accounting investigation of the books by Toks further revealed that during the period the contract was
subsisting a sum of about thirty four million naira had passed through the company account and various methods had been used to mop up funds so that nothing will accrue to him from the business arrangement.

After petitioning the police, the duo of Mr.Blaise Igbonwelundu and Mr.Hillary Igbonwelundu have refused to come in person leaving police with no other option to issue a warrant of arrest for them to come and explain their own side of the story.

Asiwaju is the Best Consensus Candidate in APC- Team Nigeria