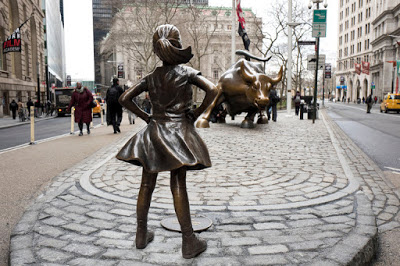 “Charging
Bull” had a message for “Fearless Girl” on Wednesday, and it was more
“Get out of my space” than “Here’s looking at you, kid.”


The message actually came from Arturo Di Modica, the sculptor who created “Charging Bull”
nearly 30 years ago. He also copyrighted and trademarked the
three-and-a-half-ton sculpture that stands near Wall Street. Since March
7, “Charging Bull” has faced off against “Fearless Girl,” a statue of a
girl posed with her fists on her hips that was commissioned by State Street Global Advisors, a financial firm based in Boston.
Mr.
Di Modica said that “Fearless Girl” was an insult to his work, which he
created after the stock market crashes in the late 1980s. “She’s there
attacking the bull,” he said.
Even
as Mr. Di Modica was denouncing “Fearless Girl” at a news conference in
Midtown Manhattan, South Street Global’s home page highlighted the
statue for its message about “the power of women in leadership” and
urged “greater gender diversity on corporate boards.”
Mr.
Di Modica and his lawyers did not disagree with that idea at a news
conference — “None of us here are in any way not proponents of gender
equality,” said one of Mr. Di Modica’s lawyers, Norman Siegel, a former
executive director of the New York Civil Liberties Union. They demanded
that “Fearless Girl” be moved somewhere else.
Mayor Bill de Blasio, who spoke out in support of “Fearless Girl” last month, reiterated its importance on Twitter on Wednesday: “Men who don’t like women taking up space are exactly why we need the Fearless Girl.”
“Fearless Girl” was seen by many as a unifying symbol during International Women’s Day last month. Chelsea Clinton and the actress Jessica Chastain posted on Twitter expressing support for the statue.

But on Wednesday, Mr. Siegel said, “Principle trumps popularity, and there are principles here.”

For
his part, Mr. Di Modica became emotional, explaining later that when he
had heard about “Fearless Girl,” his reaction was to go to the site in
Lower Manhattan and try to do something to end the face-off between the
two statues. “I said, ‘Now I’m going to turn around the bull myself,’”
he recalled.
The
lawyers said that “Fearless Girl” had subverted the bull’s meaning,
which Mr. Di Modica defined as “freedom in the world, peace, strength,
power and love.”

Because
of “Fearless Girl,” Mr. Siegel said, “‘Charging Bull’ no longer carries
a positive, optimistic message,” adding that Mr. Di Modica’s work “has
been transformed into a negative force and a threat.”

The
lawyers accused State Street Global of commissioning “Fearless Girl” as
a site-specific work that was conceived with “Charging Bull” in mind.
They said that that had improperly commercialized Mr. Di Modica’s statue
in violation of its copyright. They asserted that the city had violated
his legal rights by issuing permits allowing the four-foot-tall
“Fearless Girl” to stand across from the 11-foot bronze bull without Mr.
Di Modica’s permission.
Mr.
Siegel and other lawyers for Mr. Di Modica released letters they had
sent to the mayor; Ronald P. O’Hanley, the president and chief executive
of State Street Global; and Harris Diamond, the chairman and chief
executive of McCann Worldgroup, State Street Global’s marketing agency.
Among other things, the letters demanded the removal of “Fearless Girl.”
Anne
McNally, a spokeswoman for State Street Global, said the firm was
reviewing the letter. She added, “We continue to be grateful to the City
of New York and people around the world who have responded so
enthusiastically to what the ‘Fearless Girl’ represents — the power and
potential of having more women in leadership.”
Mr.
Siegel said he had filed Freedom of Information requests for city
records about the permits for “Fearless Girl.” It was initially issued a
one-week permit, but after it became a social media sensation, Mr. de
Blasio announced that the permit was being extended. The mayor said that
the sculpture could remain until next year’s International Women’s Day.
In
March, the mayor called the statue a symbol of “standing up to fear,
standing up to power, being able to find in yourself the strength to do
what’s right.” He also said the timing of the placement of “Fearless
Girl” mattered, coming early in Donald J. Trump’s presidency and not
long after the women’s rights marches that followed his inauguration.
“She is inspiring everyone at a moment when we need inspiration,” the
mayor said.
Mr.
Siegel said he hoped that the dispute over the two statues could be
resolved amicably. But he added, “We never dismiss the possibility of
litigation.”

Sacked NNPC MD, Esther Nnamdi-Ogbue, Whose Cook Asconded With Her Cash in 2016, Owns The $50m Found By EFCC