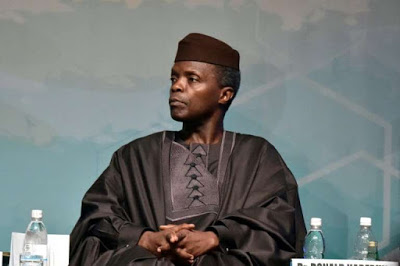 Vice President, Yemi Osinbajo, has on Friday, denied ever getting involved in a N10 million bribe, as claimed by a former Chief of Army Staff, Lt. Gen Ishaya Bamaiyi.

Recall, that Bamaiyi, in his book titled: “The Vindication of A General”, alleged that Osinbajo, was directed to convict him and others within six months, during the time, he, Osinbajo, was the Lagos State Attorney-General.

The former Army Chief, claimed that Osinbajo shielded the then trial Judge, Justice Ade Alabi, whom he accused of demanding a N10 million bribe from him.

However, the Senior Special Assistant to the Vice President, on Media and Publicity, Laolu Akande, described Bamaiyi’s claims as blatant lies.

In a statement, Akande said Osinbajo was never called to Abuja, or given any form of instruction on how to resolve the case.

According to Akande: “My attention has been drawn to claims made by General Bamaiyi, in his book, ‘Vindication of a General’, where he alleged that the then Attorney-General of Lagos State, Osinbajo, the trial Judge, (in the criminal case of his “involvement” in the shooting of Alex Ibru), Justice Ade Alabi, and the State Police Commissioner, were called to Abuja, and “directed to convict us at all costs within six months.”

“That Justice Ade Alabi, asked for a N10m bribe through “one Mr. Martin”, to facilitate his bail application in the case, and that the National Judicial Council panel composed to investigate the bribery allegation, protected the Judge.

“Specifically that Prof. Osinbajo, “brought what he said was the panel report, during one of the motions. Unfortunately, pages one through twenty-nine of the report were not produced.” While the Vice President, Osinbajo, would take more comprehensive steps to address the evil insinuations made by the retired General, I have confirmed from him, i.e. Prof. Osinbajo, that he was never called to Abuja, or at any time given any instructions on how to resolve the case. This blatant lie arose only from the fertile imagination of the author.