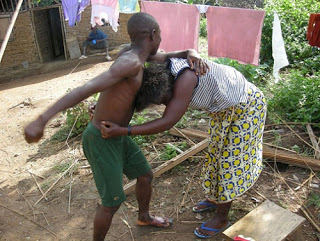 An Ekiti High Court in Ado Ekiti on Thursday barred a pastor, Victor Ekejuiba, from his matrimonial home, after he was found to persistently beat his wife.

The cleric should stay away from his wife for 12 months during which he should improve on his behaviour, the court ruled.

His wife, Caroline, an engineer, had approached the court, seeking an interim order restraining her husband from accessing the matrimonial home to prevent her from being physically assaulted.

Mrs. Ekejuiba told the court that the constant beating from her “troublesome” husband had damaged her both physically and psychologically.

In a suit number, HAD/633M/2016 , dated December 19, 2016, filed before Justice Monisola Abodunde, and supported with a 51-paragraph affidavit, Mrs. Ekejuiba sought, among others, an interim order barring her husband from having access to her to prevent her from being killed through beating.

She also sought orders barring her husband from removing “movable and immovable properties” belonging to her, including one four-bedroom flat at zone 3, road 4, along Ayegunle street, off Poly road Ado Ekiti, two-bedroom flat located at the same point, three generators, 5KVA generator, among others.

During the trial, the Mrs. Ekejuiba’s counsel, Blessing Ajileye, presented various evidence to substantiate the claim that Mr Ekejuiba was an “unrepentant wife beater.”

Ms. Ajileye presented a printed text message sent by the respondent to his wife, threatening to continue to beat her and take from her some of her properties.

Mr. Ekejuiba, however, did not deny or controvert the evidence.

In her ruling, Justice Abodunde said the issue for determination was on the rights of the applicant to be protected from harm that could endanger her life arising from matrimonial disputes- and domestic violence before she takes steps if she so wishes under the matrimonial causes Act.