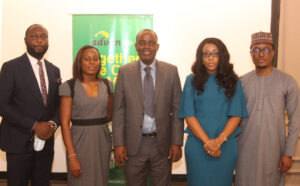 The commercial director of Biogenerics Limited has been elected as the new President of the Advertisers Association of Nigeria, (ADVAN)at the sectoral group’s 19th Annual General Meeting held at Marriot Hotel, Ikeja GRA Lagos today.

It would be recalled that Bunmi Adeniba formerly of Unilever Nigeria and recently appointed marketing director of Coca-Cola West Africa had been the acting president of the Association for the last 2 years.

Other exco members who were elected at the well attended AGM include Nwando Ajene of Nestle Nigeria as 1st Vice President, Yosola Atere of Mastercard as 2nd Vice President, Obum Okoli, High End Manager at ABinBev as Treasurer and Kenneth Iruonagbe of Tolaram as Publicity Secretary.

For the Ex-Officio position that has five statutory slots, the elected persons are Otega Ogra of BUA, Chioma Afe of Access Bank, Tolulope Olanipekun of Mouka Foam, Omolara Banjoko of FrieslandCampina WAMCO and Seni Ogunkola of 9mobile.

In another major development, Mrs. Ediri Ose-Ediale’s position was rarified at the 19th AGM. Her position at ADVAN now reads: Chief Executive Officer/Executive Director The 2022 election elicited greater interest with fifteen members showing interest in 10 positions open. The position of the president, 1st vice president and 2ndvice president attracted one candidate each. Treasurer had two members vying for the position and publicity secretary had three members wanting to assume the office.

However, seven members jostled for the position of ex-officio that statutory meant for five persons. After the election, the president, Uwubanmwen, called on all the members to come together to move ADVAN forward post-COVID lockdown.

He also stated that his administration will ensure all the stakeholders in the integrated marketing communications work collaboratively to promote professionalism.

“We are looking at reaching out to all stakeholders in imc and as one of the key stakeholders we will reach out to others in terms of collaboration and engagement. I have a good relationship and understanding with agency people. We will find a common ground in all issue for the betterment of the industry,” he said.

Meanwhile, speaking on the share number of youths in the new exco, Uwubanmwen reiterated the importance of youth in any association and organisation.

According to him, “The shared number of young people in the exco shows that the youths are taking over, and I believe they should be given the opportunity to make meaningful contributions at all levels of social life. This is good for ADVAN,” he stated.