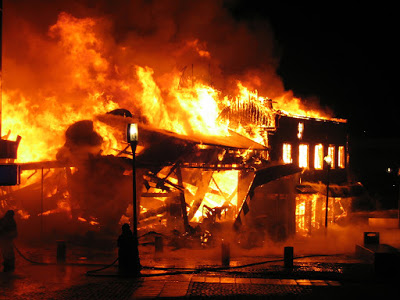 Goods and cash worth millions of naira were destroyed by fire on Saturday when more than 40 shops were razed at Baboko market in llorin, the Kwara capital.

A witness account revealed that the inferno started in one of the affected shops at about some minutes past 1 a.m.

Nobody was able to ascertain what caused the fire which lasted for several hours.

Witnesses said it took the combined team of officials from the state fire service and sympathisers time to put out the fire at about 6 a.m. on Saturday.

The chairman of the Baoko market Association, Abdulrasaq Lasoju who spoke with News Agency of Nigeria (NAN) in llorin on Saturday expressed sadness over the incident.

He said that the affected traders had lost their sources of livelihood to the inferno and appealed to the state government to come to their assistance.

Mr. Lasoju also appealed to the Kwara Government to establish a fire service centre at the market to curb constant fire outbreak.

NAN recalled that the state internal revenue service in early 2016 renovated over 70 shops in the market.

Tiamiyu Raji, the state director, state fire service, said they received a distress call at about 1a.m. and succeeded in putting out the fire at about 6 a.m. on Saturday.

He said they could not ascertain the immediate cause of the fire, but warned people to always switch off all electrical appliances at the close of each day business.

Fivesome?! What Killed the Kokomaster!