Tinubu’s Cause, Our Agenda – Akarigbo

The Akarigbo and Paramount Ruler of Remoland, HRM Oba Babatunde Ajayi, has described the 2023 Presidential ambition of Senator Bola Ahmed Tinubu as a cause for all stakeholders in the entire South West of Nigeria.
Speaking in his palace while receiving a delegation of the South West Agenda for Senator Bola Ahmed Tinubu (SWAGA) who paid him a courtesy visit, Oba Ajayi said that ”as far as Remoland was concerned, Tinubu’s cause is our cause. His agenda is our Agenda. It is a matter of must. We will support Asiwaju Bola Ahmed Tinubu towards realising his ambition”.
The Parount ruler who received the SWAGA delegation alongside three other prominent Obas namely, HRH Oba Adewale Osiberu, Elepe of EpeSagamu; Oba Sikiru Ajibowu Adeyiga, Onirolu of Irolu Remo; and Oba Mufutau Sanni, Aminisan of Oko, Sagamu, prayed that the former Lagos State Governor’s Agenda will become a reality.
Earlier, the chairman of the SWAGA group , Senator Dayo Adeyeye expressed appreciation to the Oba for welcoming the delegation to his palace. He explained the mode of operation of the group, describing it as a strictly voluntary and self-financing body, with the objective of convincing Asiwaju Bola Ahmed Tinubu to contest for the position of the President of the Federal Republic of Nigeria come 2023.
“We decided to start early so as to show our seriousness because it is the turn of South West and he (Asiwaju Bola Ahmed Tinubu) is the most qualified person for the position”, he said.
Adeyeye informed that the group had earlier launched the SWAGA project in Oyo and Osun states during which they visited prominent traditional rulers.
He explained that the Ogun State chapter of the group will be launched on Tuesday hence the wisdom of paying such visit to the Akarigbo.
Those on the visit include Sen. Rilwan Adesoji, Vice Chairman , SWAGA, Hon.Bosun Oladele, Senator Gbenga Obadara, Hon. Ifedayo Abegunde, Apostle Oloruntoba Oke, Chairman, Ifako-Ijaiye Local Council Area and co-ordinator, SWAGA, Lagos State; Hon.Oyetunde Ojo; Hon. Julius Olori, chairman, Ojodu LCDA; Hon. Dotun Oyekanle, chairman, Onigbongbo LCDA; Hon.Bunmi Windapo; Hon.Gboyega Isiaka; and Hon. Rotimi Makinde.
The delegation also paid a courtesy call on the former governor of Ogun State, Otunba Gbenga Daniel at his Asoludero Court residence.
Welcoming the delegation, Daniel charged them to work assiduously and ensure real swagger is injected into every aspect of their strategy and activities towards delivering the 2023 Presidential ticket to Asiwaju Bola Ahmed Tinubu. 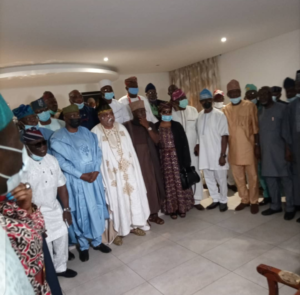