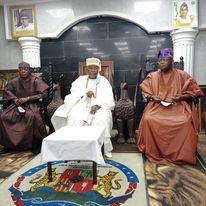 Two prominent Ogun State traditional rulers have added their voices to the growing agitation for All Progressive Congress (APC) national leader, Asiwaju Bola Ahmed Tinubu, to join the 2023 Presidential race.
Speaking at two separate events in Abeokuta and Ilaro while playing host to a delegation of the South West Agenda (SWAGA) Initiative, a volunteer group mobilising support for the Asiwaju’s 2023 Presidential ambition, the Alake and paramount ruler of Egbaland, HRM Oba Adedotun Aremu Gbadebo and the Olu of Ilaro, Oba Kehinde Olugbenle both made a clarion call on all sons and daughters of Yorubaland to come together and work for Tinubu’s success in the 2023 elections.
The delegation, led by its chairman, Senator Dayo Adeyeye and comprising top party leaders, National Assembly members, SWAGA members and party stakeholders from the entire south west, had made an early morning stop at Oba Olugbenle’s palace in Ilaro. 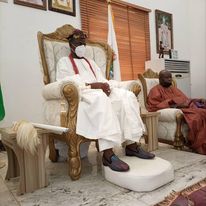 Welcoming them to the palace after listening to an address by Adeyeye, Oba Olugbenle declared that “the clamour for Asiwaju Bola Ahmed Tinubu to aspire to the nation’s highest office is an idea whose time has come. So its therefore not a task of your group alone, but that of all sons and daughters of the Southwest of Nigeria “.
He further stated: ” Without any gainsaying, Tinubu is the most experienced, most proven and most resourceful candidate to lead Nigeria to a new level of growth and economic stability from 2023 and beyond.
“He is a person the entire nation can trust. I will stop at nothing to mobilize all available resources, along with my entire colleague Obas in Yewaland; and our diverse people and communities, to ensure he wins the Presidency”, he said.
He described himself as a beneficiary of the unassailable legacy of Tinubu’s eight-year rule in Lagos state; having lived his early life there; and now a beneficiary in terms of the vast changes that had occured to lives and property in the city.
He traced his admiration for Tinubu back to his profound support for a more egalitarian society as well as robust intellectual support for southwest delegates at the 2014 national conference in Abuja.
On the national stage, he noted that Tinubu’s influence had grown tremendously pan Nigeria; and that he had long invested immensely in people and communities in the length and breadth of Nigeria; attributes which he noted, would make him quite sellable in all nooks and crannies of the federation.

He offered robust prayers and thanked tgecdelegation for volunteering their resources to encourage Tinubu to join the Presidential race in 2023. 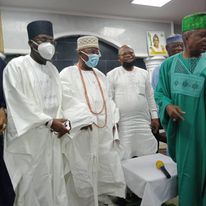 The delegation equally had a wonderful reception at the palace of Oba Gbadebo.
In his brief but pungent address at the occasion, Alake affirmatively declared that he had long noted and appreciated Tinubu’s sterling qualities since his early days as Governor of Lagos State.
“The person whose project you have come to present to me is a part of my palace here. He is one on my prominent chiefs and has this palace’s greatest support and goodwill at all times”, he said.
The Alake enjoined the delegation to go back to their different states and mobilize extensively to ensure Tinubu’s success at every stage of the contest.
He prayed fervently for his success and called on all Nigerians to continue to pray for peace and stability in the country.
The Ogun State launch of the SWAGA Vision will come up on Tuesday 23rd February, 2021.

Tinubu’s Cause, Our Agenda – Akarigbo