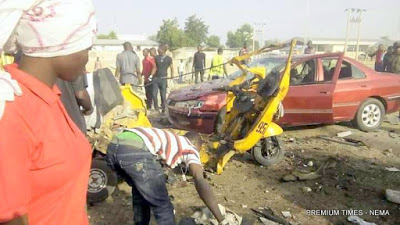 Three suspected suicide bombers have been killed after one of them
detonated an explosive device by a stationed fuel tanker early on Friday
morning along Damboa Road in Maiduguri, Borno State.Two other fuel
tankers were also burnt as a result of the explosion suspected to have
been carried out by Boko Haram foot soldiers.

The spokesperson to the National Emergency Management Agency in the
North-East, Abdulkadir Ibrahim, disclosed that the bodies of the three
suicide bombers have been evacuated by emergency workers.

Ibrahim said: “The fire has been brought under control, while casualty evacuation has been concluded.”

PRNigeria learnt that no other person was affected in the explosion.