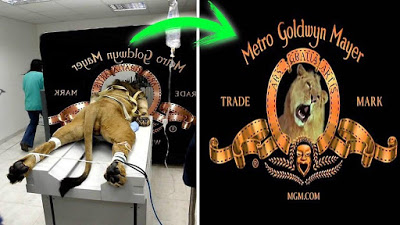 There is something magical about sitting in a darkened movie theater
and one of those trademark studio company logos appearing on the screen.
Those several seconds can trigger powerful emotions, as they are
reminiscent of all those epic moments we have experienced in front of
the big screen, all of them preceded by one of the iconic Hollywood
logos. Plenty is condensed in those several emotional moments: the
wonder of sitting in a cinema for the first time, goosebumps, sadness,
elation, fear… and everything that we’ve ever experienced in that
magical room called a movie theater.

Whether it’s a lion roaring wildly, a paramount mountain peak or a
child fishing from a crescent moon, they are all powerful images that
are worthy of opening some of the best movies ever made. But do you know
how they made it there? Here is the story of how Hollywood’s most
iconic studio logos came to be.

A relatively young company, DreamWorks was founded in 1994 by Steven
Spielberg, Jeffrey Katzenberg and David Geffen, after Katzenberg’s
resignation from The Walt Disney Company. The three wanted their own
live-action and animation film studio and set three conditions for
themselves: they would make fewer than nine movies a year, they would be
free to work for other studios if they chose, and they would go home in
time for dinner.

Spielberg wanted a computer generated image as the company’s logo and
had an idea for one where a man climbs up on the moon and starts
fishing. Illustrator Robert Hunt tweaked the idea so that the animation
starts from the fly hitting the water, and it then pans to the boy
sitting on the moon fishing. Curiously, the boy used was Hunt’s son,
William.

Columbia was founded in 1918 as Cohn-Brandt-Cohn Film and it wasn’t
until six years later that they adopted the current name. It is a
historical and poetic name used for the United States and the woman on
the logo is its visual representation. The now iconic image, however,
underwent five major transformations since it was first introduced in
1928. The most distinguishing difference is the American flag which was
adorning the woman in the crude, early versions of the logo. The current
version was adopted in 1992.

Perhaps the most iconic of all logos in Hollywood, it carries the
studio’s motto Ars Gratia Artis, meaning “Art for art’s sake”. The logo
is older than the company itself. It was created in 1916 by Howard Dietz
for Goldwyn Pictures which merged with Metro Pictures and Louis B.
Mayer Pictures to create MGM in 1924. The original logo featured the
company’s mascot Leo the Lion but numerous others were used in later
years. You might be amazed to find out that the famous roar existed even
in the days of silent cinema!

Check out the video for the full stories behind the five most famous
logos of Hollywood studios, including Paramount Pictures and The Walt
Disney Company.

Racism: Day When Nigerians Say No To Dutch KLM (VIDEO)

Racism: Day When Nigerians Say No To Dutch KLM (VIDEO)