The candle night session and 8th-day Fidau held in honour of popular Yoruba actress, Aisha Abimbola, has birthed a foundation that will cater for women living with the deadly disease.

It will be recalled that Ambibola, otherwise known as Omoge Campus, reportedly died of breast cancer in Canada and had been buried by the Canadian government.

The cancer foundation was the initiative of the Golden Movie Ambassador of Nigeria (TGMAN), headed by its President, Ambassador Saidi Balogun, who said the dream of Aisha was to have a cancer foundation that would cater for women both young and old battling with the problem.

The candle night, which held at the Blue Roof of the LTV 8 at Agidingbi, Ikeja Lagos State, witnessed a large turnout of actors and actresses who came to pay their last respect to one of their own.

Despite the absence of Abimbola’s remains at the venue, family of the late actress, members of TGMA, who were clad in blact T-shirts that bore the picture of the deceased, betrayed emotions as tears flowed freely.

The night also afforded Abimbola’s colleagues the opportunity to pay their last respect as they took turns to pay tributes to the deceased, whom most of them described as one womman who lived for all.

Some of them, who spoke with R described Abimbola, who was the vice president of TGMAN before she died, as a woman of great virtues.

The candle was later followed the next day with the 8th-day Fidau as islamic clerics offered prayers for the repose of her soul.

President of TGMA, Balogun, who was the brains behind the event said it was important for members of TGMA to honour one of its own the best way they could achieve it, adding that floating a cancer foundation was Abimbola’s long time dream.

“We all felt sad about her death because she was very active as the Vice President of TGMAN and I am still in shock that she’s no more. Shortly after her death was announced, we decided as an association, to organise a candle night and Fidau in her honour because that is the best we could do for her. To the glory of God, we got the support of some influential Nigerians and we were able to come up with something as big as this.”

Speaking with R at the venue, Abimbola’s twin brother, Taiwo, described her sister as all they had. She stated: “We were born same day as triplet and I can tell you that she was a great woman. We usually prayed for her because she was the bread-winner of our family. Aisha does not joke with her family members, siblings and everybody. She was our all.”

Also speaking, Mariam Adebukola Musa, who is the last born of the family, said she has lost the best sister in the world to the cold hands of death. She confirmed to R that her sister joined the list of the other two siblings, who had died years back, reducing them the siblings to four of seven. 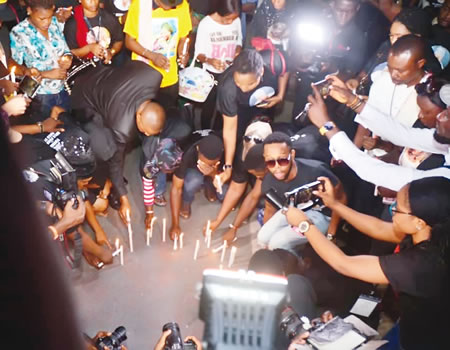 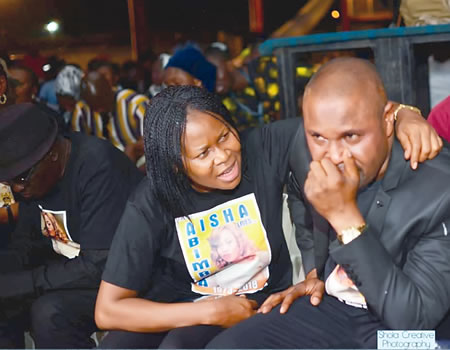