May 30th is almost here and activities are already revving up for the 60th birthday celebration of the ace star, Sir Shina Peters.

The mega star who serenaded us in the early 90s would be appreciating his maker for the journey so far and different activities have been lined up to make the day a memorable one.

Friends of Sir Peters, who formed themselves into organising committee for the occasion, decided to take the preparation to the next level and inform the media after meeting for over a month. Hence, a media parley was organised for the Afrojuju mega star to initiate the media and also have a chat with the celebrant.

The meet took place at the Ehi Braimoh’s Adna Hotel Ikeja, where the star and the committee of friends underwent a question and answer session. 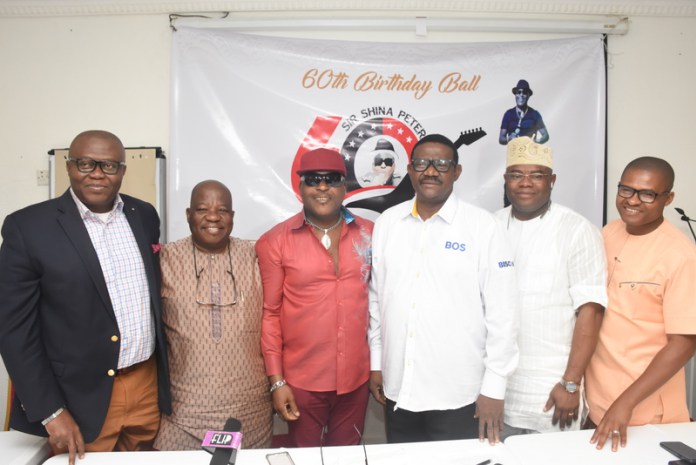 Sir Shina Peters, who was pleasantly surprised by the media chat, explained that he had no regrets except more love and respect for whatever he has passed through in his over 5 decades on earth.

Dr. Segun Okeowo, who is Sir Peters’ long time promoter and member of the organising committee praised the celebrant while relating his first meeting with the ace singer. He informed the gathering that he met Sir Peters when the latter was denied US visa in his first attempt to travel abroad due to false report on him. Dr. Okeowo, who was a marine attached to the embassy back then, had to stand for the singer and convince the management that Peters was not a drugpusher, and that the report was just to malign his personality.

With that assurance, he continued, Sir Shina Peters went on to the United States and held a successful concert. Dr. Okeowo saw the success of the concert as a business opportunity and turned into his promoter. “And since then,” the promoter said, “I have not looked back.”

On what motivated the singer to launch Sir Shina Peters Foundation, a foundation geared towards mentoring and empowering upcoming musicians in the art of making good music, Mr. Gboyega Okegbenro, Vice Chairman of Peachtree Advertising Co. and also a member of the committee, said for playing at the big stage for over 40years, it only made sense for SSP to do something that would outlive him.

Prince Bisi Olatilo, who is the chairman of the organising committee, further said that Sir Peters has been mooting the idea for long but only wishes to formalise it now when asked why wait till he is sixty years old before having a foundation.

“The foundation would touch all genres of music but would be focusing more on indigenous music,” Sir Shina Peters said, “This is important because I don’t want my talent to die with me.”

Mr. Ehi Braimoh also proposed a monthly masterclass for journalists to hang out and discuss entertainment while legends like Sir Shina Peters, Sunny Ade and Ebenezer Obey would be invited to lecture on their lives and the entertainment industry.

When asked to confirm if he had ever composed songs for Ebenezer Obey and Sunny Ade, Sir Shina Peters retorted, “Who am I to compose songs for the titans?!”

The birthday boy, however, advised that humility and hardwork are the needed materials to success in life.

Sir Shina Peters, whose brand of music tagged Afrojuju, a fusion of juju and afrobeat premised on fast percussion beat with the use of electronic keyboard, seized the momentum with the release of 1989’s block buster Ace album from which he ranked double platinum with releases like Ijo Shina, Shinamania, Give Women Chance and many more.

As the count down to the event kicks off, METRONEWS NG wishes the star more years ahead and happy birthday in advance.

Benue killings not product of any planned agenda