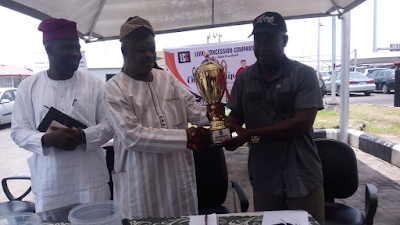 The defending champions of Lekki Concession Company (LCC)/Eti-Osa Local Government football championship, Pat Football Club of Ajah have retained the trophy.
The team defeated Star Football Club of Igbo Efon 3-0 in the final match played on Sunday at Alasia playing ground opposite Lagos Business School, Ajah. All the goals were scored in the last 15 minutes of the first half.

The game started on a cautious note with both teams playing fantastic football. However, Pat FC showed their superiority by  hitting the back of the net thrice in the last fifteen minutes of the first half.

The MD/CEO of LCC, Mr Mubashiru Hassan reiterated his earlier promise that the winner of the competition will be sponsored to participate in.the state chapter of the Federation Cup saying, “I don’t want them to be local champions”.

According to him, the competition is meant to engage youths in the area as well as discover talents for all levels football at the national level.

Hassan advised the players to take the competition serious because it can be their stepping stone to achieving greatness.

He enjoined the Local Organising Committee (LOC) to expand the tournament so that other local governments can participate in future and also to make it competitive.