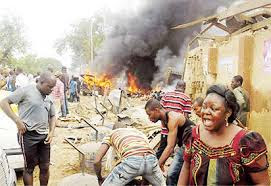 The Nigerian Army has said that troops deployed in Kaduna South, have recovered a total of 79 assorted guns, and several rounds of ammunition.

The troops operating under the code name, “Operation Harbin Kunama 11”, were deployed in the troubled area and surrounding forests, to tame the bloody clashes between herdsmen and farmers.

More than 200 people have been killed since the beginning of the crisis.

In a statement by the Director, Army Public Relations (DAPR), Brigadier General Sani Usman, the Army said efforts were being intensified, to apprehend the perpetrators of acts of violence in the area.

Usman noted that the cooperation and support of the residents, led to the Saturday, April 22 recoveries.