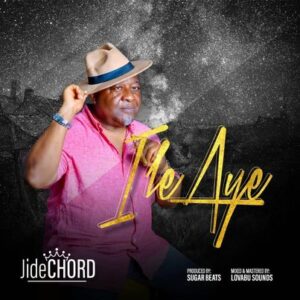 Jide Chord scores another first by being the first Juju musician to cover a Fuji song.
According to him, he has always been fascinated by Fuji music since the early days of the doyen of Fuji music himself Alhaji Sikiru Ayinde Barrister.
In a chance encounter with our reporter at Heathrow Airport a few days ago, he recalls how he would endlessly listen to Barrister’s music while his Mum would berate him for listening to “Apala” music. Suggesting he was listening to illiterate music. His interest and respect for Fuji Music came through in his famous album FESTIVAL OF LOVE in which he dedicated a track to Fuji, aptly named, Fuji Vibes.

On his immediate plans, Jide Chord announced the imminent release of a new single titled ILE AYÉ.
In his words…… It’s a simple recording of one of K1’s old songs.
He recalled that he actually got permission to do a cover of the song from K1, way back in the mid nineties. They apparently met up one evening at the now defunct Taste of Africa restaurant in Oval, South London and was granted the green light to do a cover version of the song on the spot.
On why he has taken so long to take advantage of the opportunity, Jide Chord replied, It’s always been at the back burner because I am a songwriter myself with too many songs yet to be released but this worldwide lock down gave me the chance to take a closer look at human behaviour and I was shocked at what people have been doing behind my back. Then I thought, it’s time to send out a message with K1’s song.

The song, which was Produced by Jide Chord’s Son SUGARBEATS and Mixed by LOVABUSOUNDS is due out by the middle of March and will be available on all music streaming platforms.

Nigerians Will Be Shocked By Those Behind Girls’ Abduction – Says Matawalle