Can pants be so tight that they cause blood clots, or back pain? 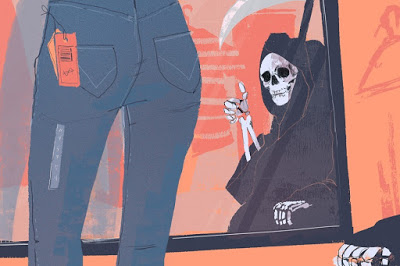 Recently I was sitting next to my friend Arianna in a coffee shop when I noticed her pulling at the side seams of her jeans, looking worried. I asked her what was going on.

“Have you ever worried that your jeans are going to give you blood clots?” she asked. Surprisingly, of the many dubious health concerns I have considered in my lifetime, that wasn’t one of them. “It just seems like maybe we shouldn’t be wearing skinny jeans all the time,” she added. “I feel like they squeeze our organs or something.”

When I got home (and after I took off my own skinny jeans, and replaced them with sweatpants), I did a little research. It was not especially hard to find people who echoed Arianna’s skinny jean-related fears: There was a Daily Mail story about a woman who spent four days in the hospital after having to have her jeans cut off of her body; there was a summary of a study that purported to show that wearing skinny jeans can cause muscle and nerve damage by cutting off blood flow. Interestingly, nearly everything I found referred to the same story of the woman whose jeans were surgically removed from her body. A New York Post story (which uses pictures of Kendall Jenner and Harry Styles wearing tight jeans to illustrate their dangerous sexiness) cites a physical therapist whose client once wore jeans “so tight that they forced her knees into extension, so she could not bend them the proper 35 degrees for a proper gait.” The tightness of her jeans, he said, was likely responsible for her back pain.

I think it makes sense (at least for us non-experts) to think that wearing anything very tight could affect our internal health; just think of the diagrams of Victorian ladies’ torsos pre- and post-corset. One is under the general impression that it is never a good thing to be squeezed. But corsets were often made of bone (or other rigid material), and were yanked tightly around the body with the help of another person. Hopefully that is not how anyone is getting into their jeans in the morning. And no matter how tight your jeans are, they’re still made of fabric that moves with your body.
“These jeans are being worn by … people who really should not have any peripheral vascular disease.”

“I own a couple pairs of skinny jeans myself, and I feel fine,” says Kurtis Kim, a vascular surgeon and the director of the vascular laboratory at Mercy Medical in Baltimore. “I’m older, but I’m not too old to wear them. And most of them are very stretchable — they bend and confine to the position you take when you sit down.”

As Kim explained it to me, there is little to no reason to fear that your skinny jeans will lead to clotting problems. “Arteries will not compress even in really tight jeans that you have a hard time fitting into, because arterial pressure is pretty high,” he says. Vein pressure, on the other hand, isn’t as high, which is why people sometimes get indentation marks on their calves from socks—veins can be compressed by the sock, displacing fluids in the underlying tissue. It’s more feasible that skinny jeans could cause circulation problems than blood clots, but even still, it’s not likely. “Most skinny jeans don’t get tight enough [around the ankle] to manifest in swelling,” says Kim. Your jeans—whether skinny, straight-legged, flared—might be really tight around your butt and your thighs, but they’re usually not as uniformly tight around the ankles as even socks are. And if your non-skinny jeans aren’t causing you health problems, there’s no reason your skinny ones should either.

Additionally, most people who wear skinny jeans are on the younger side, and therefore much less likely to be at risk for the sorts of health issues that wearing really tight jeans might feasibly cause. “These jeans are being worn by a younger group of people who really should not have any peripheral vascular disease or venous disease,” Kim says. “Now, if you’re talking about an 89-year-old lady who’s trying to wear this and go to church and sit down for awhile, that’s another story.” It’s worth noting, too, that the woman who was cut from her jeans had been wearing them in a crouched position for “hours” packing for a move—and that lack of movement likely played as big a role in the leg swelling she experienced as did the jeans themselves. If you’re relatively mobile, and you don’t have any sort of vascular disease, and you’re younger than, say, 89, you’re probably going to be just fine.

Of course, it’s important to use common sense when shopping for new jeans. It’s like that dad joke about visiting the doctor (“Doc, it hurts when I do this.” “Then don’t do that.”): If your jeans are so tight they’re hurting you, don’t wear them. “If people wear some skinny jeans and their legs swell up when they sit down, or if their feet or toes or those distal parts of the leg become numb and tingly — when people feel those things when they wear jeans, this is not a fitting jean for them,” Kim says. As unlikely as it is for you to develop any circulation problems (much less a blood clot) as a direct result of your skinny jeans, life is still too short to be that uncomfortable.

Still, there’s no need let an alarmist headline convince you to throw your favorite jeans away. It’s curiously easy to find articles that suggest clothing commonly worn by women (and especially young women) is harming their health—ahem — but often much harder to find any actual scientific support.

Twerking on the dead (VIDEO)