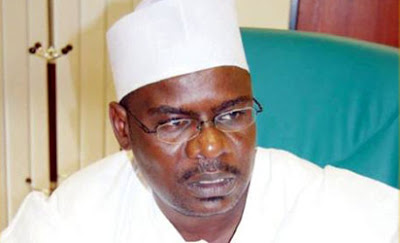 The Nigerian Senate on Wednesday suspended former majority leader Senator Ali Ndume for six months for not ‘making due diligence’ before asking the upper chamber to investigate both the Senate President Bukola Saraki and the senator representing Kogi West Senatorial district, Dino Melaye.

Ndume’s suspension followed the adoption of a recommendation made in a report the Senate Committee on Ethics and Privileges. The report was submitted on Wednesday during plenary.

The suspended senator had on March 21 called on the Senate to investigate Saraki over an allegation that an impounded sports utility vehicle imported into the country with fake documents belonged to him and Melaye over the allegation that his degree certificate was fake.

While presenting his case then, Ndume drew attention to a publication by an online medium, Sahara Reporters, that the impounded armoured Range Rover SUV which is said to worth N298m and that the insistence of the Senate that the Customs boss Hameed Ali appear before it in uniform is connected to his refusal to release the vehicle which was seized on January 17.

“My colleagues that are following events, particularly online, have seen or heard or read the rain of abuses on this Senate and the misconception of the fact that we invited the Customs boss based on a very unpopular policy that affects the people we represent, but now we are faced with this.

Senate’s ethics committee said on Wednesday that both claims by the newspaper were false and that the failure of Ndume to investigate the claims privately was unbecoming of a ranking lawmaker.