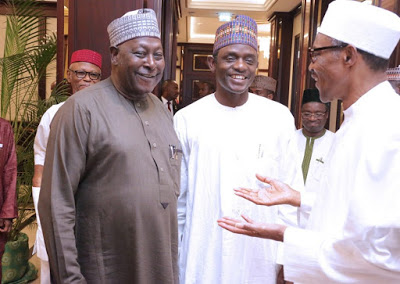 Secretary to the government of the federation (SGF), Babachir Lawal,
says that President Buhari will be in office for eight years, that is
till 2019. Babachir said this when he addressed a pro-Buhari support
group at the Unity Fountain in Abuja yesterday.

“Baba
Buhari didn’t anticipate the problem that we are in. I’m sure you are
all aware. The people who caused this problem are the ones challenging
the government. I tell you that they will fail in the name of God. In
fact, they have failed. You are aware of the economy that the president
inherited, the economy in which revenue has virtually collapsed. The
infrastructure is no where to be seen. The roads were dilapidated. The
schools were dilapidated.
The hospitals were abandoned. The
people who caused it are not worried at all. Shamelessly, they accused
the president of not performing. And in fact, some of them wished him
dead. But I can assure you that by the grace of God, he will outlive all
of them. I assure you that by the grace of God, in the next one year,
Nigeria will have a booming economy. We know what they were doing to try
to sabotage the activities of government to bring Nigeria back to
economic prosperity but the president is also aware. They will fail.
Nigeria will never go back to the position it was before 2015. The
foundation being laid by the government is solid and nobody, even after
the president has finished his eight years, can ever take us back to the
pre-2015 days. This, I can assure you,” he said.