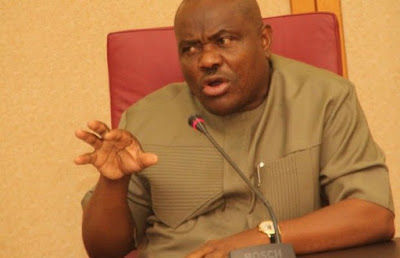 Rivers State Governor Nyesom Wike said yesterday that he gave his
backing to the federal government in handing over the two Bell
helicopters imported by the Rivers State government to the Air Force.
The Customs Service announced on Friday that the helicopters were
smuggled into the country by an unknown person who failed to produce
end user certificate from the office of the National Security Adviser
(NSA) in contravention of Section 36 ( 2) of the Customs and Excise
Management Act.

The Customs Area Comptroller, Mr. Frank Allanah, put the import duty
value of the two helicopters and their accessories at
N9,757,135,240.86k. He proceeded to hand them over to the Chief of Air
Staff, Air Marshal Sadique Abubakar, at a ceremony at the Murtala
Muhammed Airport, Ikeja.
However, Wike in a statement by his Special Assistant on Electronic
Media, Simeon Nwakaudu, in Port Harcourt said he officially wrote to
President Muhammadu Buhari asking that the two helicopters which were
bought by the immediate past administration in the state be handed over
to the Air Force.

He explained that his decision was informed by the high import duty
and the refusal of the federal authorities to grant the State a waiver
to clear the choppers. The governor said that it was unfortunate that
security agencies would resort to political propaganda and outright
lies, when the facts about the helicopters are in public domain.

”I went to the federal government to give me a waiver for us to clear
the helicopters but the federal government refused. ”I wrote a letter
to the president and assured him that the helicopters were meant for
security purposes, they should be handed over to the Nigerian Air
Force.”I am surprised that they have started propaganda and political
falsehood on the said armoured helicopters. What kind of country are
they turning Nigeria into?

”We stated that we cannot pay the custom duties because the
helicopters are not for commercial use. They are to be used to monitor
the creeks and track criminals. ”I wrote to the president to give the
helicopters to the airforce. It is shocking that the Customs would turn
around to claim that they impounded the helicopters. “The Chief of
Staff to the President admitted that I have done well when I wrote the
letter to the President.”