See Me On Monday With These Documents – Osinbajo Tells Lawal, Oke 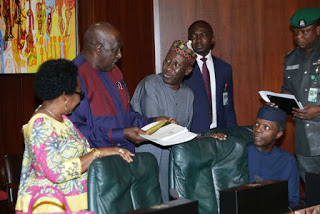 The presidential committee investigating the discovery of $43.4m by
the Economic and Financial Crimes Commission (EFCC) in Osborne Towers,
Ikoyi, Lagos, has written to suspended Secretary to the Government of
the Federation (SGF), Babachir David Lawal and the Director General of
the National Intelligence Agency (NIA), Ambassador Ayo Oke.

The committee is investigating corruption allegations against Lawal, in the award of contracts under the Presidential Initiative on the North East (PINE).

The committee, which on Thursday grilled some officials, is headed by
Vice President Yemi Osinbajo. Attorney-General of the Federation
Abubakar Malami and National Security Adviser Babagana Monguno, are
members.

The separate letters to Lawal and Oke directed the duo
to submit all documents relating to award of contracts by PINE and the
cash remittances to NIA in the last two years.

The Osinbajo-led panel listed documents to be submitted as follows:

details of appropriated funds in the last two years;
allocation of special funds if given;
approvals for funds and by who;
expenditures; withdrawals from the Central Bank of Nigeria(CBN) if any;
covert operations and for what purposes;
completed and non-completed projects;
list of contracts awarded;
ongoing projects;
and operation of safe houses.

The committee said it expects the two officials to send their responses on or before Monday.
This will be followed by continued questioning of Lawal, Oke and some
government officials and agencies whose names have not been revealed.

It was gathered the modalities for their appearance are being worked out by the committee.
Oke had earlier told the panel that former President ,Goodluck Jonathan approved a sum of $289 million.

The said sum, tagged Special Intervention Fund, was
reportedly approved by the former president for the security agency in
February 2015, ahead of the presidential election.

Osinbajo
committee will also probe speculations that the $289 million might have
been part of the slush funds deployed for the 2015 general election.