0
SHARES
8
VIEWS
Share on FacebookShare on Twitter
The Operatives of Rapid
Response Squad (RRS) of the Lagos State Police Command,  have arrested a
35 year old man, Abiola Hamzat and his accomplice, Adebayo Kazeem, 32,
for stealing 20 bags of cement from a brick making company based in
Agbado area of the state. 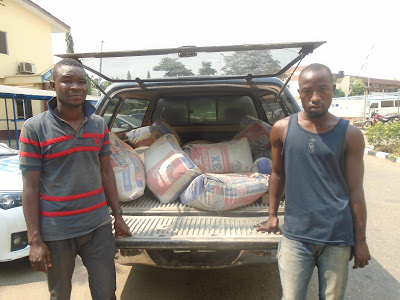 The suspect was arrested by the Policemen after he had successfully stolen the items from their working place.
The
arrested suspect, a father of three, stole the 20 bags of cement from
the company a day after he was promoted to the post of a supervisor with
a financial reward of N215, 000:00 per month.
It was learnt that the suspect who is a university graduate, was lured into the crime out of greed and lack of contentment.
According
to sources within the company, Hamzat, a graduate of Ladoke Akintola
University of Technology (LAUTECH), started work at the factory as a
Contract Security from where he rose to become an operator.
“However,
he was formally promoted three days ago to the post of a Supervisor,
when the company’s management discovered that he was a university
graduate”, the source added.
He was arrested on last Thursday along with an accomplice after moving 20 bags of cement out of the factory in Agbado area.
Upon his arrival at the RRS’ Headquarters, the suspect who owned up to the crime, said  that he masterminded the crime.
In his confessional statement, the suspect said, “I masterminded the crime but I only co-opted Adebayo into the plan.
Initially,
Adebayo discouraged me that it was not possible to steal cement at the
company. After so much pressure, he told me to carry the gateman along
in order to be successful which I eventually yielded to”.
He
explained further, “I had an accommodation problem with my family. I
was desperately looking for funds to house them. That was what pushed me
into it”.
According to sources within the company, Hamzat’s new salary as a Supervisor triples his wage as an operator.
While
confirming the arrest, the Spokesperson for Lagos State Police Command,
Superintendent of Police, Dolapo Badmus, advised companies operating in
the state to be vigilant at all time.
The suspects have been transferred to the State Criminal Investigative Department (SCID), Yaba for prosecution.
Previous Post