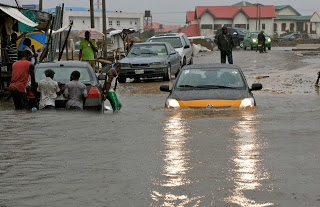 As the 2017 rainy season gathers momentum, the Lagos State Government has allayed the fears of residents over the torrential rainfall witnessed in the State on Thursday, saying that necessary steps had been taken to avert any incidence of flood disaster in the State.
The State Commissioner for the Environment, Dr. Babatunde Adejare, in a statement said that the State Government had in recent times carried out intensive tour of some flood prone communities in the State to clear up blocked drainages and canals.

The commissioner wondered why any right thinking person would be dumping refuse on water courses and drainages created for free flow of storm water, saying the numerous campaigns against such practice was for the interest of the residents.

“Canal is a storm water channel for the conveyance of storm runoffs, they are God’s natural protection for holding water during massive flood and it is not a place for anybody to build a house or dump refuse. Those in the habit of doing such must stop henceforth,” Adejare said.

Allaying fears of teeming Lagosians apprehensive of the rain, the Commissioner said that indiscriminate dumping of refuse in the gutters had caused a lot of environmental disasters, warning that the government would no longer tolerate the building of illegal structures along channel right of ways in the state.

To this end, he said the government had since begun demolishing illegal structures and shanties erected on the drains especially in flood prone areas.

Adejare, however, urged residents living on wetlands and flood prone areas to be cautious and careful, urging them to limit their movement if possible and to move to higher ground if need be.
He explained that it is their responsibility as a government to protect lives and property, appealing for the cooperation of all Lagosians in their quest to avert any flood mishap in the state.