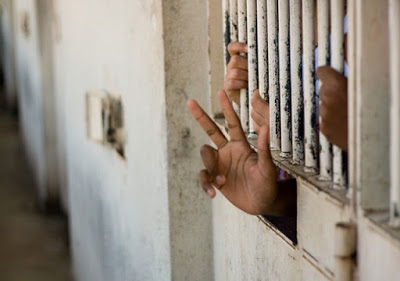 The Controller General of Nigerian Prison Service (NPS), Ja’afaru
Ahmed has promised to improve welfare package and medical facilities in the
service.
The Prisons boss made the disclosure at Federal Medical Centre (FMC),
Owerri while commiserating with the victim of the recent attack on Prisoners by
yet to be identified gunmen within the premises of Owerri High Court.
Mr. Ja’afaru who had had also visited other inmates being treated in
Owerri Prisons Clinic for various degrees of bullet wounds, commended the timely
response of other security agencies during the attack.
He assured members of the public that the fleeing fugitives would be
rearrested in no distant time.
Commending Imo Governor for offering financial rewards for
information that would aid the arrest of fugitives, he appealed to the public
to provide useful information that would lead to the arrest of the notorious criminal,
Chibueze Henry Oyenkachi, aka vampire.
The prisons boss also had audience with the Deputy Governor of Imo State,
Prince Eze Madumere at the government house and the Chief Judge of the State,
Hon. Justice Pascal Obinna Nnaji whose premises the unfortunate incident occurred.

The Chief Judge promised to continue to support the course of speedy
trial of inmates with a view to decongesting the prison and mitigate security
concerns usually associated with managing suspects in custody.
It would be recalled that on the 27th of January, 2017 at about
1000hrs, 58 pre-trial detainees who were taken to Owerri High Court in 2 Black Maria
Court Duty Vehicles were attacked as the inmates disembarked from the vehicles within
the premises of the court.  The gunmen
who were said to have strategically positioned themselves in the premises opened
fire and shot sporadically hitting 5 inmates in the process.

The escort wardens in collaboration with other sister security
agencies were able secure 49 of of the inmates and returned them to safe
custody. Unfortunately, a notorious criminal, Chibueze Henry Oyenkachi, aka vampire
on whose behalf the hoodlums are suspected to have carried out the dastardly
act, and 7 other prisoners escaped.

Owerri prison was built in 1905 with an intake capacity of 540
inmates but as at the time of the incident the prison had a population of 2,260
prisoners. Out of this number 2,044 are awaiting trial.