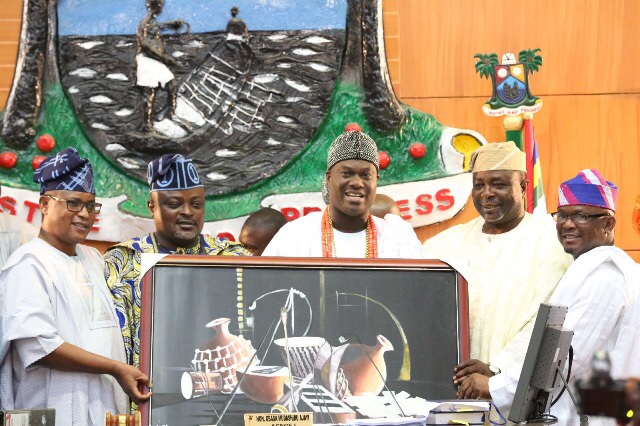 The Speaker of the Lagos State House of Assembly, Rt. Hon. Mudashiru Obasa, has restated the commitment of the Assembly to the promotion of Yoruba language and the culture of the Yoruba people.
Rt. Hon. Obasa spoke on Thursday at the plenary session of the Assembly where the Ooni of Ife, His Imperial Majesty Adeyeye Enitan Ogunwusi Ojaja 2 was a special guest.
At the sitting, Obasa assured the foremost Yoruba monarch that he and his colleagues in the Assembly will continue to work to promote the Yoruba language and culture.
“We’ve started conducting our Thursday plenary sesions in Yoruba. We’ve gone ahead to organise the Yoruba Stakeholders’ Summit and we will ensure that the teaching of Yoruba language becomes compulsory in Lagos State. We will not relent and we will continue to do more so that our dear language will not go into extinction,” he said.
The Lagos Assembly Speaker urged Yoruba wherever they are to make the language the tool of communication with their children at home. “The era of using other people”a language as tool of communication with our children should be rejected and should be done away with,” he said.
Ooni Ogunwusi commended the Lagos lawmakers for being in the forefront of the struggle to promote the Yoruba language and culture. “I’m very happy to be here and I want to commend the members of the Lagos State House of Assembly for being in the forefront of the struggle for he promotion of Yoruba language and culture,” Oba Ogunwusi said.
The monarch stated further that he was particularly pleased with the Yoruba plenary sitting.of the House saying that he had to push forward his visit to the House by 24 hours because he wanted to witness the Yoruba plenary session of the lawmakers.
:I’m highly impressed and indeed with what you have done, the Lagos State House of Assembly has become role model for others in the country in the area of culture promotion,: Ooni Ogunwusi said.
The programme was concluded with exchange of gifts between the Speaker and.his visitor.