NIGERIAN ARMY TAKES PREMIUM TIMES TO COURT
The Nigerian Army has instituted a legal action against an online publication, the Premium Times over its failure to retract and apologize over false, subversive and malicious publications against the person of the Chief of Army Staff Lieutenant General Tukur Buratai and the Nigerian Army. 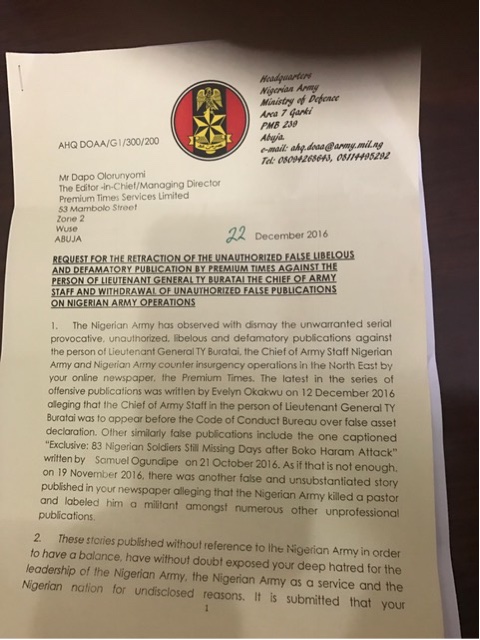 All efforts to make the medium make amend proved abortive.

Consequently, the Nigerian Army sent a letter to the management of the of the online publishers to retract and apologize before 31st December 2016.

The medium however remained adamant and recalcitrant.

Consequently, the Nigerian Army has briefed it’s lawyers to institute legal action against the medium. 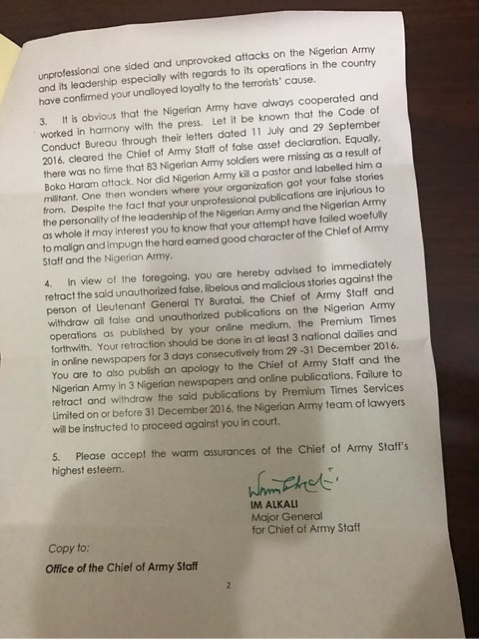 PREMIUM TIMES has replied a letter sent by the Nigerian Army, threatening legal action against the newspaper for publications about the army and its chief, Tukur Buratai, a Lieutenant General.

The letter also claimed the paper published reports without reference to the army, saying the stories exposed a “deep hatred for the leadership of the Nigerian Army”.

The letter expressed displeasure with three stories published by the medium between October and December last year. The army described the stories as “false, unsubstantiated, and unprofessional” but provided no evidence to back its claim.

The letter demanded PREMIUM TIMES retract the reports and apologise to the army and Mr. Buratai.

PREMIUM TIMES, on Tuesday, through its lawyers, delivered a detailed response to the Army, affirming its stories, and unequivocally rejecting the demand for retractions and apology.

The paper, instead, asked the army to write a letter within seven days of receiving its reply, withdrawing the allegations and threats against it and its staff, or risk being sued.

Jiti Ogunye, the newspaper’s principal counsel, who signed the response, took the army to task on the “grave implications” of its letter, and describing the army’s letter as a threat to the well-being and life of PREMIUM TIMES’ staff.

“By your letter you have threatened the lives of our clients, and our clients are thus obliged to put the public on notice that should any harm come to them, you, the Chief of Army Staff and the Nigerian Army should be held accountable,” he wrote.

Mr. Ogunye said the “chilling threats” contained in the army’s letter was an affront on the constitutional guarantee of civilian control of the army and the freedom of the press.

“It is our view that all working journalists and news outlets are entitled to some protection from public officers, especially of the military and security agencies who are charged with the duty to secure and protect Nigeria and Nigerians, their lives and property, and maintain law and order, but who often, because of the uniqueness of that duty and for reason of the exclusive bearing of arms and control of our commonly owned ordinance, assume very erroneously that they are above the law,” he said.

He rebuked the army for describing PREMIUM TIMES’ stories as “unprofessional” saying military and other public officials were not in a position to question the paper’s professionalism.

“It really can be exasperating and disconcerting to see public officers condescendingly castigate journalists, many of whom are not only internationally acclaimed and celebrated but who also have up to forty years of practice as journalists under their belt,” the letter stated.

“We must also rebuke the false assumption that our military men, exclusively, are an epitome of patriotism and national sacrifice, and that they love Nigeria more than civilians do.

“Sir, the Nigerian Army of which you spoke so glowingly is an heir to a military that unpatriotically subverted, many times, constitutional governance in Nigeria, plunged Nigeria into a three-year internecine civil war, committed unspeakable rights violations against the Nigerian people and thwarted the efforts of Nigerians to restore democratic governance to Nigeria.

“The Nigerian Media, if you must be reminded, played a frontline role and suffered gross human rights violation, perpetrated by the military, in the struggle to rid Nigeria of military dictatorship. Our clients, therefore, totally reject your claim that they hate Nigeria, their country.

“The Nigerian Army does not love Nigeria more than Nigerians love themselves. An armed force of less than three hundred thousand officers and men cannot claim to love Nigeria, a country of over one hundred and eighty million people, more than the Nigerian civil population.

“A Nigerian Army that carries out such acts that not only violate the human rights of the citizens, but also subvert democracy and the rule of law cannot lay a claim to patriotism superior to the patriotism of the Nigerian media,” he wrote.

He added that the role of the media, as that of the military, is entrenched in the constitution and one is not superior to the other. Mr. Ogunye said by the threats contained in the army’s letter, and by tagging it an enabler of terrorism, PREMIUM TIMES’ constitutionally-given right to practice journalism had been breached or was about to be breached.

“You should know that your wild allegations against our clients implicate the invocation, against our clients, of Section 4 of the Terrorism (Prevention) Act, No. 10,2011, which prescribes a maximum prison term of 20 years for any person convicted of knowingly, in any manner, solicits or renders support for an act of terrorism or a proscribed terrorist organization, and the death penalty where death results from such solicitation or rendering of support. And you should also have realized that your allegations imputed, on the part of our clients, the commission of treasonable offences and aiding the enemy under our criminal law.
”

PREMIUM TIMES asked the army to write a letter, addressed to its Publisher, Dapo Olorunyomi, withdrawing the threats and allegations within seven days. The paper warned of legal action to enforce its fundamental rights.

“In the circumstances, we hereby demand that you write a letter of withdrawal of these threats and allegations, to our clients, wherein you are to assure them of their safety and protection by the security and law enforcement agencies in Nigeria, in particular, the Nigerian Army. The letter, to be addressed to Mr. Dapo Olorunyomi, Managing Director of Premium Services Ltd/ Editor in Chief of Premium Times must be received within seven (7) working days of delivery of this letter to you.
“That should you fail, refuse or neglect to write and deliver the above letter as demanded, our clients will not hesitate to institute a legal action against you, your principals, the Nigerian Army and the Federal Government of Nigeria, to enforce their fundamental rights under the Constitution,” the letter stated.