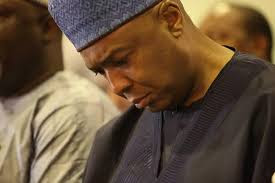 The Federal Government has filed fresh charges against the Senate
President Dr. Bukola Saraki, who is standing trial before the Code of
Conduct Tribunal.

The Senate President pleaded not guilty to all the charges.

In the new charges, the Senate President is accused of making false
declaration, when he declared that he purchased a property at number 15A
Macdonald Street Ikoyi, Lagos through his company Carlisle Properties
Limited in 2003, but the said property was actually sold to G and C Real
Estates Properties and Investment Company limited for 12million Naira.

He is also accused of making false declaration that he acquired the
properties through sales of agricultural commodities, when it was
purchased using a loan from a commercial bank.