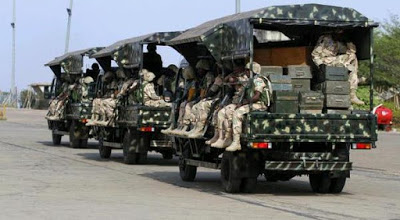 As part of efforts to clear g all criminals out of the Brigade general
Area of  responsibilities, Troops of 33 Artillery Brigade, Nigerian Army
Bauchi, acted on a tip off by well meaning Citizen of Bauchi City on
the criminal activity perpetrated around popular Wunti market area of
the State by the fake Nigerian currency
vendors.

The gallant troops
dressed in a covert plain clothes, busted in to the ever busy Wunti
market on 31 March, 2017 where one Mallam Idris Hassan, 47 years was
arrested. As at the time of his arrest, he was in possession of Twenty
one (21,000) Thousands denomination Nigerian fake currency
notes.

He claimed that, the fake
currency notes was given to him by one Mallam Auwal Wanzam who reside in
Bauchi City.

Preliminary investigation revealed that,
they also have syndicate group in Kano State were one Malam Abubakar
Musa was arrested in Kano city.

The suspected gang
leader and the printer of the fake currency, Malam Suleiman Abubakar of
Karfin  Madaki, Ganjua Local Government area of Bauchi State is still at
large.

The suspects and the
recovered fake currency notes are there by handed over to the Economic
and financial crimes commission (EFCC), Zonal office, Gombe, Gombe,
State command for further investigation.

The
Brigade wish to thank the general public, for the support received
always. And also urge the general public to continue the good job by
reporting any suspicious criminal activities around them. “Together we
shall all root out all criminals out of Bauchi
State”.