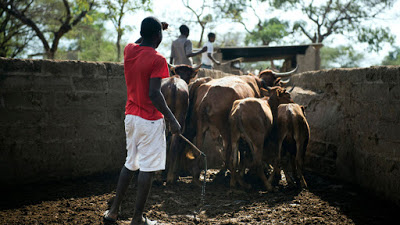 Commercial banks in Zimbabwe will soon be compelled to accept livestock such as cattle, goats and sheep as collateral for cash loans to informal businesses under a new law presented to parliament Tuesday.

Under the Movable Property Security Interests Bill tabled for debate by Finance and Economic Development Minister Patrick Chinamasa in the House of Assembly, the Reserve Bank of Zimbabwe will compile and administer a collateral security register in which small-business operators and individuals can register their movable assets as security for credit.

Vehicles, television sets, refrigerators, computers and other household appliances will become acceptable as collateral once they are evaluated and registered in the central bank’s register, according to Chinamasa.

“As minister in charge of financial institutions, I feel there is need for a change of attitude by our banks to reflect on our economic realities,” he said. Banks are “stuck in the old ways of doing things and failing to respond to the needs of our highly informalized economy.”

The southern African nation has mainly used the U.S. dollar since economic mismanagement and runaway inflation rendered its own currency worthless eight years ago. A liquidity squeeze ensued as growth faltered and a strong dollar eroded the competitiveness of Zimbabwe’s exports. The cash crunch has become so severe that banks are now limiting customer withdrawals.

Zimbabwe’s economy is forecast to shrink 2.5 percent this year, after contracting an estimated 0.3 percent last year, according to the International Monetary Fund.