National Tragedy! 29 Pupils, 2 Teachers Die While on Their Way to Exam Location 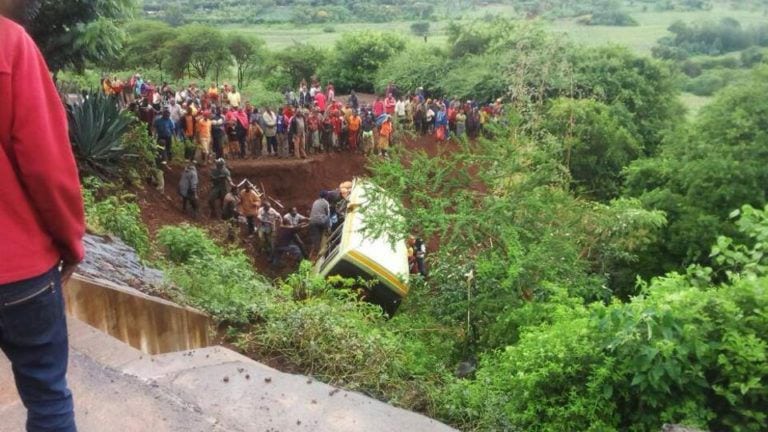 A sad incident has claimed the lives of about 29 pupils who were on their way to the exam hall after a tragic road accident
Tanzania was plunged into deep mourning today after 29 pupils, two teachers and a driver died in a bus crash in the northern part of the country.
The accident happened near Karatu.
The pupils of the Lucky Vincent English-Medium School in Arusha city were en route to write an examination in Karatu when their bus skidded off the road and fell into a river, police said.
The children, aged 12 to 13, were standard seven pupils at the Lucky Vincent school in the nearby town of Arusha, according to Charles Mkumbo, the regional police commander.
“We lost 29 students and two of our staff, and the driver died too,” said Innocent Mushi, director of the Lucky Vincent Primary School in Arusha.
The dead included 12 boys and 17 girls, he said.
President John Magufuli has commiserated with the families of the students in a statement describing the accident as a “national tragedy”.
Regional police commander, Mkumbo confirmed the death toll to the media, adding that several children escaped with injuries.
Rescue operations were launched immediately after the accident to recover the bodies that included 12 boys and 17 girls.
The accident was believed to have been caused by rainfall in the hilly area, but the police commander said they are investigating the incident.