My Wife Loves To Fight Unclad All The Time – Husband Reveals 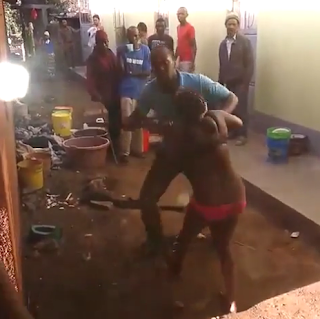 A tricycle rider, Jelili Olanrewaju, has begged a court to end his
marriage with his wife, Rafiat Olanrewaju, at the Ile Tuntun Customary
Court, Mapo, Ibadan, Oyo State because of her unruly behavior.

Jelili sued for divorce on the grounds that his wife was stubborn,
troublesome, quarrelsome and disrespectful to his parents and relatives.
He added that she was always fighting him.

He thus prayed the court that their marriage be dissolved and the custody of the children granted him.

“The greatest mistake I have ever made in life was to marry my wife, “Jelili said.

“While we were dating, she hid her true nature from me. I thought I
knew her well enough and believed she was going to be a dutiful wife.

She started showing her true self the day we got married. And a week after I started regretting ever marrying her.

“We have lived in eight houses in the 11 years of our marriage as a
result of my wife’s quarrelsome nature. My wife not only fights me; she
also fights with our neighbours and people in the neighbourhood.

“She starts and ends the day fighting. Our neighbours wait to hear her
shout and curse every morning. When they hear her voice, they know the
day has broken.

”Our belongings were often thrown out by the different landlords we rented apartments from due to my wife’s unruly behaviour.

“The most shameful aspect of it is that everybody in our compound and
neighbourhood has seen her unclothedness, the plaintiff added.

“Whenever she wants to engage in a fight, she pulls off her clothes
leaving only her pants and bra which are torn in the course of the fight
thus leaving her stark Unclad.

“I’m a tricycle driver. I run the
business in our neighbourhood. My family and I live on the little
income I make from the business.

Many times I have ended up spending this income to treat my passengers’. All because of my wife’s disgraceful act.

“There were times she would waylay me, drag down my passengers if they
were females and fight them. She would not only embarrass them but
assault them publicly.

I bear the brunt of her misconduct
because I carry the victims to the hospital for medical attention and
pay the medical bills. This often disrupts my business anytime it
happens,” he stated.

“The last time she fought, we were again thrown out of our apartment by our landlord.

She fought Unclad with a tenant. I mediated in the matter, but she
disregarded me. And same with the landlord and other co-tenants She
fought and destroyed things in the compound which was the major reason
we were sent packing.

“I decided we were going to live separately
henceforth. I, therefore rented an apartment for her and paid N30,000
as rent while I moved into another apartment somewhere else.

“She came to my place with her sister early one morning to fight me.

My offence according to them was that I was dating another lady. My
mother was around then. She slapped my mother and tore her clothes for
trying to mediate in the matter.

They destroyed my property and went away with my money and fan.

“I went to report at the police station and a policeman went with me to
effect her arrest at her sister’s place where she was hiding.

We
got there but her sister resisted her arrest and almost assaulted the
policeman. I was then advised at the police station to come to court,
“he stated.

Rafiat disagreed to her husband’s plea for divorce and custody of their children.

“My mother in-law is our problem, “the defendant stated.

“My husband and I and four others were living with her in her one-room
apartment early in our marriage. Due to paucity of fund , I offered to
help her sell cooked rice and amala (yam flour) which I hawked. This I
did dutifully.

“Rather than being appreciative of this she started finding fault in all I did and encouraged my husband to take another wife.

“She’s is the cause of the frequent fights between me and my husband.
The last time we fought, he sent me out. I went to my mother who sent
delegates twice to his family to make peace but he and her mother
refused to have me back.

“He later rented a N20,000 per annum
apartment and left me and our three-year-old child. The place was bare-
there was no bed, mattress or furniture. I was sleeping on cold floor
with our baby for two months.

“I complained to him, but he did nothing.

“I told him it wasn’t decent to live alone as a married woman. I knelt
down and begged him to please move in with me, but he told me his uncle
would explain the situation of things to me.

“He refused to tell
me where he was staying when I requested from him and stated that his
mother must not know he was at my place.

“I eventually knew where
he was staying and went there early one morning to carry the mattress
we were once both using and some other household items. I knocked,
opened the door and moved into the room and there I saw my husband in
bed with a lady I can refer to as a younger sister of mine. I was
shocked. He also felt embarrassed that I caught him pants down.

“He got up, put on his trousers and started beating me. Her mother who
was around came in and joined him in beating me. They tore my clothes
and left me stark Unclad.

“I don’t want my children to suffer by
leaving them in another woman’s care. I still love my husband and I am
not willing to part ways with him.”

The court president, Chief
Agbaje Olasunkanmi, after listening to the duo requested the presence of
their parents in court in the next adjournment.

He thus adjourned the case till April 12 and ordered both parties to appear in court with their parents.