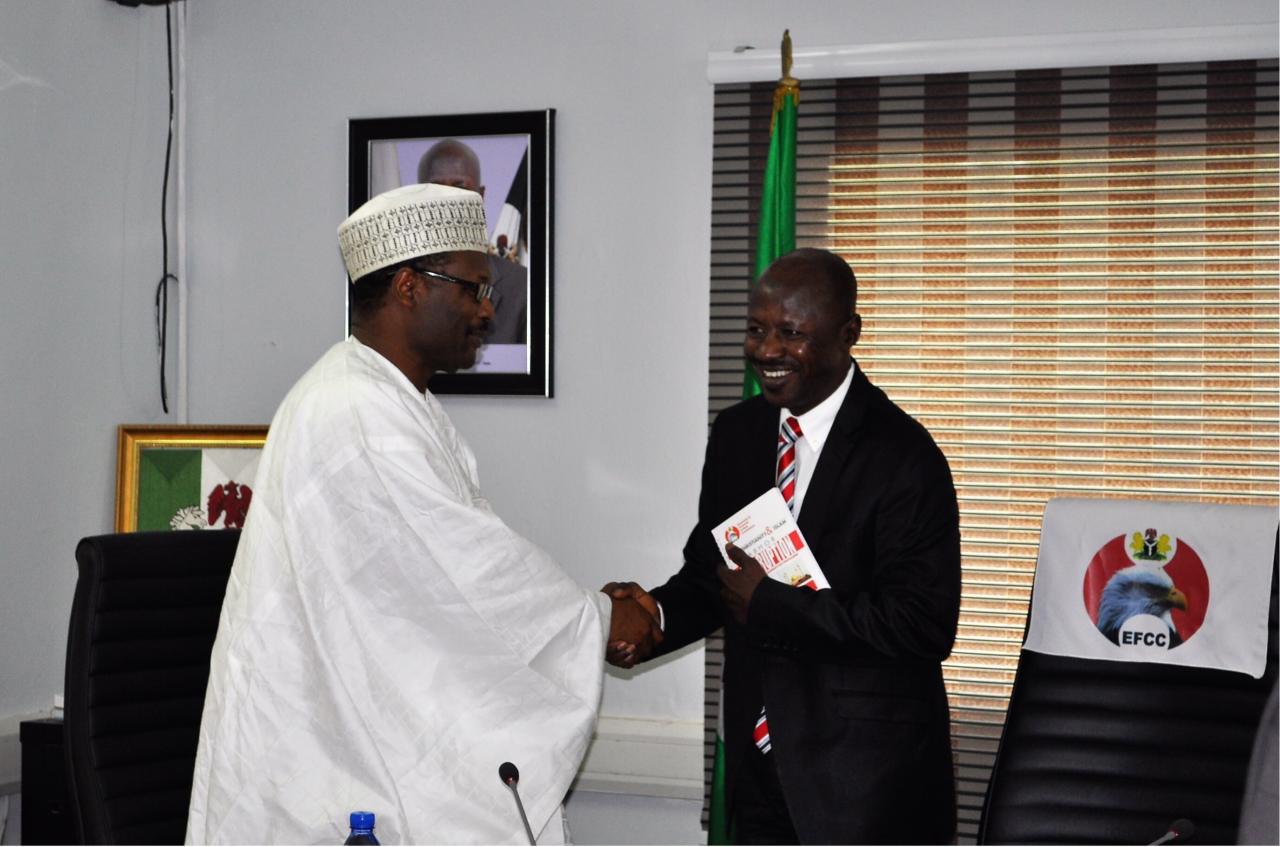 Chairman of the Independent National Electoral Commission (INEC), Prof. Mahmood Yakubu has urged the Economic and Financial Crimes Commission (EFCC) to henceforth prosecute any INEC staff found to have committed any offence related to its mandate, without waiting for the conclusion of INEC’s internal investigation.

Exchanging views with the EFCC Chairman, Mr. Ibrahim Magu during a meeting at the anti-corruption agency’s headquarters yesterday in Abuja, Prof. Yakubu said it took INEC about four months to thoroughly investigate all the allegations against the 202 staffers contained in the Interim Report the agency forwarded to the Commission, before a final decision could be reached.

To avoid this sort of delay in the future, Prof. Yakubu implored the anti-corruption agency to commence the prosecution of any staff, if it possessed sufficient evidence to do so.

On the decision taken so far, Prof. Yakubu explained that a Committee was set up to conduct a thorough investigation of all the allegations contained in both the Report and other findings, with all the affected staff members given the opportunity to defend themselves in the spirit of fair hearing. He averred that the Committee eventually established that over N3.4 billion was received by some INEC staffers in 16 states, apparently to influence the results of the 2015 General Elections. As a result, he said about 205 staffers have now been placed on interdiction, which entails suspension from duty and being placed on half salary, pending the final determination of their respective cases.

He explained that the implicated former National Commissioner and five former Resident Electoral Commissioners (one of whom is now deceased) have been referred to the Presidency through the Secretary to the Government of the Federation (SGF). The reason, he stated, “is that they were appointed by the Federal Government and as such, the Commission cannot take further action against them.”

However, he said the Commission was referring 70 other staffers back to the EFCC for further investigation and possible prosecution, because of insufficient evidence.

He assured the EFCC of the Commission willingness to join it in creating more awareness on the consequences of corruption as a preventive measure, since this aspect, he affirmed, ”is also contained in the EFCC Act.” According to him, sensitization is a cheaper way of fighting corruption since it is capable of discouraging potential offenders from taking dangerous risks. “We shall look at ways of partnering with the EFCC on this,” he said.

Responding, Mr. Magu said the EFCC regards corruption as “a crime against humanity”. He lauded the INEC Chairman for cooperating with the anti-corruption agency in the cases involving some INEC Staff.

He said: “We are already prosecuting some INEC staff in Lagos, Port Harcourt, Kano and Gombe. In the future, before we take any such case to court, we will inform INEC and share details of the Charge Sheet with you. And if you have anybody in your Legal Department that wants to join our prosecution team, such persons are welcome. This will add value to work.”

He commended the INEC management for its decisive action on the issue. “When you take actions like these, you are reducing our work. And as far as the fight against corruption is concerned, we (EFCC and INEC) are on the same page.” He agreed with Prof Yakubu that sensitization of the populace on the consequences of corruption was part of the EFCC Act which, he assured, will be pursued vigorously.

My Wife Loves To Fight Unclad All The Time – Husband Reveals