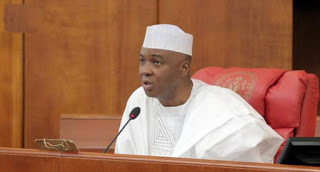 Senate President Bukola Saraki has said that the federal government’s case against him before the Code of Conduct Tribunal is feeble and, as such, he is not seeking a political solution to stave off conviction.

In an exclusive interview with Daily Trust Newspaper, published on Sunday, Mr. Saraki said though he and his loyalists were not happy about the trial, it would not be a subject of negotiation aimed at ending executive-senate rift.

The federal government dragged Mr. Saraki before the CCB over false asset declaration and other corruption allegations in 2015, not long after he defied his party, the All Progressives Congress to contest and win Senate leadership, with strong support from the opposition Peoples Democratic Party.

“When that case started, if you go by the drums at that time, that case now as far as I am concerned is almost gone,” said Mr. Saraki in the interview.

The Senate-Executive rift which was brought more to the fore when the legislature suspended confirmation of presidential nominees for the positions of Resident Electoral Commissioners over the former’s refusal to sack acting chairman of the Economic and Financial Crimes Commission, Ibrahim Magu, whose appointment the Senate twice refused to confirm.

Some senators reportedly told the leadership of the All Progressives Congress who met with them that Mr. Saraki’s case at the CCT had to be dropped for there to be a smooth working relationship between the executive and the legislature.

But when Mr. Saraki was pressed for comment against the backdrop of the alleged demand, he said “no”; his trial would not form the basis of any negotiation to address the strained relationship between the two arms of government.

“No, no. I have never made it an issue and I do not intend to make it an issue,” Mr. Saraki said in the interview.

“The last witness that came before CCB, one by one all the questions they asked him, was this man ever invited before CCB, he said no. Is there anything in this form that he did not declare, he said no. As I said from Day One, that case should never have gone to CCT. EFCC has no business taking a case to CCT. CCB is saying all these things; we don’t know anything about them.

“This is the first time that CCB will take anyone to court without first asking him to come and write a statement. This is the first time that EFCC will prosecute a case at CCT. So many things in that trial are abnormal. People who have been following that case already know that it has collapsed. So, I have no fear about it and we will not put it on the table. Certainly, we were not pleased by it, to see the head of one arm of government sent to a trial that is more political than anything else.

“That was what those senators were talking about. But for the last two years, did it stop us from working? We are carrying on, doing our best in working for people’s welfare. So, while senators are not happy, I don’t think we should misinterpret what they said. This trial cannot be the reason for any rift between the two arms of government.”

Having alleged his trial was politically motivated, Mr. Saraki was asked to mention who orchestrated the trial.

He did not name anyone, but said was reported to have laughed and said he would investigate before providing argument to back his claim.

“This was an issue that happened 13 years ago even though they say that criminal issues have no limitation of time. Two, was the man ever invited to make a statement? If you put all these issues together, it raises suspicion that it is all political.

“But we have gone through the process, we are coming to the end of it and I am confident that Insha Allah I shall be vindicated. There was another case, of forging Senate rules and it collapsed, so I believe that in this one too the truth will come out,” he said.

“When President Buhari was away for two months and rumours were flying everywhere as to the real situation, President Buhari received many guests [in London] but who was the person who came out and said, ‘President Buhari is fine and is coming back home’? Tell me, who was it?

Bride fails to show up for wedding in Ondo, mom slumps and hospitalized