Bride fails to show up for wedding in Ondo, mom slumps and hospitalized 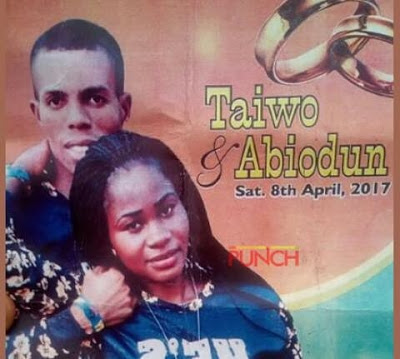 Guests at a wedding in Ondo state were thrown into confusion as the bride of the day failed to show up for her wedding over the weekend.

The mother of the bride, was reported to have slumped.

Reasons for the bride’s action is presently unknown, but it was gathered that the development caused confusion in both families as all efforts to know the whereabouts of Taiwo by the groom’s family proved abortive.

A family source said the couple began the marriage rites in December 2016 at the residence of bride’s parent with a traditional introduction ceremony. The church wedding was however, fixed for Saturday, April 8, 2017.

He added that there was no premonition that the final part of the wedding would not hold.

A friend of the groom, who did not want his name in the print, explained that all arrangements had been concluded and the church service was to be held at a Celestial Church of Christ in the ancient town but every one was surprised with the alleged disappearance of the bride.

He said, “All was well with the groom and the bride until Saturday morning when Taiwo failed to turn up for the occasion and since then she has remained incommunicado.”

Another source narrated that the mother of the bride slumped when the news of her daughter’s disappearance was broken to her. She was said to have been rushed to the Ondo State Specialist Hospital, Ondo.