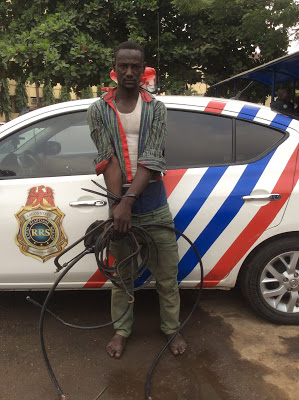 About 24 hours after the arrest of a cable vandal by operatives of the Rapid Response Squad of the Lagos State Police Command, men of the security outfit has nabbed another cable thief on Oba Akran Road, Ikeja, Lagos early Wednesday morning.

The first vandal, Bayo Agboola, a cart pusher, was arrested on Oba Akran at 3:30 a.m. on Tuesday, at Oba Akran Road, Ikeja, with an armoured saw and two sets of cutting pliers trying to cut a cable from an unlit lamp post.

The 30 year old Agboola, a three time ex – convict, had attempted to take to his heels before he was overpowered by the police on patrol of the area.

Agboola in his statement to the police disclosed that he was trying to cut off a disused cable when the police arrested him, adding that he was out early to pick metal to escape the arrest of LAWMA officials.

The second vandal, Abubakar Usman, 27, from Jigawa State, was arrested on Oba Akran at 4:00 a.m. Ikeja, almost at the same spot Agboola was arrested the previous day.

Usman, who was also arrested with a hand-saw and two pieces of cut cables measuring up to 2 meters each, said “I bought them from a friend minutes before I was arrested.

I purchased it at a cost of N500 from another cart pusher around 3:30 a.m. because my Boss, Mandela buys anything electrical from us.

He buys cable at a very good price”.