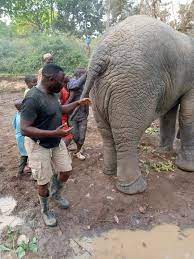 The case of a strayed elephant in a Saki community in Oyo State is generating heat as concerned members of the Sobo Onigbongbo, Saki community are accusing the chairman of Saki West Local Government of conspiracy and claimed death of the animal.

Below is the copy of the petition sent to the Executive Governor of Oyo State.

We are the concerned youth of Saki. We express our sincere appreciation to you for all the giant strides your administration has been taking in Oke-Ogun, particularly in Saki. You are not only undertaking new developmental projects, but you are also completing your predecessor’s abandoned projects – the path not usually taken by many. All these strides have made you a proverbial elephant too giant even for your political enemies to deny sighting. We wish your administration continued successes. We write this petition to officially acquaint you with the crude and cruel; illegal and unprofessional evacuation of a strayed elephant from Kobo, Onigbongbo, Saki by some supposedly stakeholders and the conspiracy that surrounded its purported death.

Your Excellency Sir, On January, 2022, Adesope Abeeb, a farmer and member of concerned Saki youth sighted an elephant in his farm at Kobo, Onigbongbo, Saki. He immediately alerted the people around and posted the information on his Facebook account for Public awareness. Soon afterwards, the place literally turned to a tourist centre as people from far and near started trooping in to the farm to have a close-range sight of the elephant. Sir, it may interest you to know that throughout this period, the animal was harmless, calm and friendly. Moving forward, the media houses, both print and electronic media reported the news which attracted more people to the place.

Sir, on the 9th February, 2022 the Oyo State Ministry of Agriculture headed by Honourable Niyi Adebisi sent a letter to the chairman, Saki West Local Government instructing the latter to take charge of the animal and should, on no account release it to any person or institution while the Ministry was working round the clock to take the appropriate steps. As part of the efforts, an inter-ministerial meeting was proposed involving the Ministries of Agriculture, Justice, Local Government Matters and Environment with an agendum of how to handle the animal matters without violating any laws and constituting threat to life and property. Unfortunately, however, the meeting could not hold because the elephant was mischievously evacuated before the meeting date. 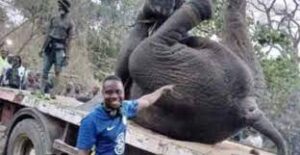 Sir, after the trio of the University of Ibadan, the Saki West Chairman and the Ministry of Environment perfected their connivance, conspiracy and deal, the University came down to Saki on February 17, 2022 and evacuated the elephant. Of importance to mention is that the evacuation team was led by one Dr. Kabir Popoola from the zoology Department of the University not a wild life biologist as one would expect. No wonder the evacuation process is a definition of cruelty to animal. The animal was wickedly tied and unprofessionally lifted to the truck as if it had no life in it. In fact, it was pathetic!

Your Excellency Sir, we wish to inform you further that after the evacuation, the Saki West Chairman, Engineer Sarafadeen Omirinde transferred a sum of N180,000 to Okere of Saki, Oba Surveyor Khalid Olabisi as the latter’s share from the elephant’s deal. The king in his usual style rejected the money. We are also aware that the chairman gave some of his accomplices a sum of N200,000 as their own share from the deal.

On 18th February, 2022, a day after the evacuation, we heard a sad rumour that the animal was dead. By implication, the animal did not survive the mistreatment. However, this remained a mere rumour until the said Dr. Kabir Popoola declared the animal dead on Punch newspaper. Our hearts have been heavy and our eyes filled with tears since this sad news of ‘murdering’ the harmless animal broke. Sir, the most surprising thing is that up till this moment, the University have not proved the death of the animal beyond mere declaration. All efforts to see the remains of the animal or the pictorial evidences its death were truncated.

Sir, the Endangered Species (Control of International Trade and Traffic) Act prohibits individual trade in wildlife. It also emphasizes that if such animal should be transported, its safety and survival must be guaranteed. The questions begging for answers now are: did the Saki West Chairman sell the animal to the University? If he did not what was the money he was sharing meant for? Why did he go over board to get the harmless animal evacuated against all instructions? Did the University of Ibadan purchase the animal? If they did not why did they explored all means – legal and illegal to have the custody of the animal? Why did they keep people in darkness as to the remains of the animal and the circumstances surrounded its death? Why did they evacuate the animal when they could not guarantee its safety and survival? In whose interest are they keeping the purported tusks? The questions go on and on. Your Excellency, Sir, it may interest you to know that the elephant weighed 5 tones, and it is worth $1.7 million in the International market. 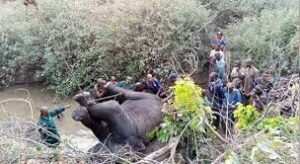 Your Excellency, the sustained public records of your stewardship in the last two years have proved beyond any reasonable that you have zero tolerance for corruption. The fairest TESCOM appointment and establishment of Oyo State Anti-Corruption Agency (OYSACA) by your administration lend credence to this position. This is why we believe strongly that you would not allow this kind of conspiracy and corruption to slide. We are confident that you would use your good office to investigate the matters and take the appropriate steps. We awaits your actions, Sir. Attached with this letter are some exhibits. Thanks.

1OOO OGUN WOMEN TO RUN FOR HEALTHY LIVING IN JUNE