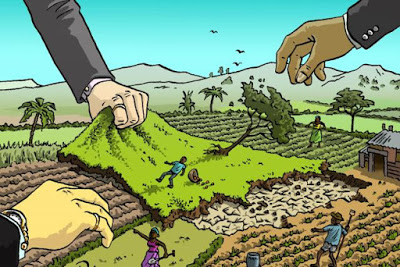 Residents of the Millennium City Centre Estate, Kosofe Local Council of Lagos State, under the aegis of the Millennium Citi Centre Residents’ Association, have sent a Save-Our-Soul petition to the Inspector-General of Police and the Lagos State governor, Akinwunmi Ambode, to quickly come to their rescue over what they called ‘harassment and violence’ visited on the estate by alleged hoodlums and land-grabbers, popularly known as ‘omo oniles.’

In a petition addressed to the Inspector General of Police, the residents accused some families of spearheading the violence and extortion of the residents.Thugs brandishing dangerous weapons have invaded the serene environment of the estate, blocking the gates while harassing and extorting both residents and visitors to the estate.
The petition, which was signed by the chairman and secretary to the association, Mr. Soji Adeniji, and Mr. Kingsley Okeke, respectively, noted that the unwholesome activities of the family is being allegedly championed by one chief in the area.

The petition reads in part: “The unwholesome activities of the Delfino Anrhonio-Da-Miranda family has taken a different dimension. They have now resorted to intimidation, molestation, unwarranted show of force, and forceful entry into the estate.

“In furtherance of the above, on Tuesday, April 18, the ‘omo oniles’ in a commando-like operation, dislodged the estate’s security post, and arrested the chief security officer and two other security personnel under a trumped-up charges.  “They, thereafter, took over the estate’s gate and started controlling traffic, extorting money from vehicle owners and developers. The community was consequently thrown into confusion and serious apprehension.”

These invaders, the petition said, are now parading the streets of the MCC Estate, disturbing workers lawfully engaged at construction sites.The community is, therefore, calling for thorough investigation into the matter, with a view to bringing the perpetrators to book saying their actions are against the Property Protection Law 2016 of Lagos State, and a flagrant violation of the 1999 constitution of the Federal Republic of Nigeria.