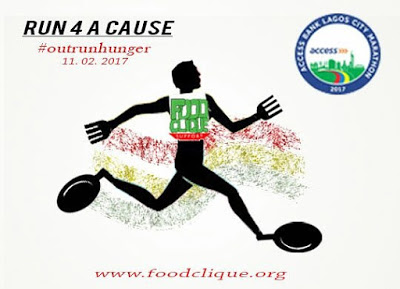 For
the second year in a row, FoodClique Support Initiative will be
fielding a team of marathoners made up of volunteers, hunger advocates
and philanthropists to participate in this year’s edition of the Access
Bank Lagos City Marathon in a bid to creating more awareness for hunger
eradication.
The
body, a registered Non Governmental Organization (NGO) with the
Corporate Affairs Commission (CAC/IT/NO 54151) has its main vision to
see hunger become a thing of the past. Since inception, the NGO has
provided meals for thousands of individuals which include children,
senior citizens, widows, physically challenged, homeless, needy
families, and socially vulnerable people.
At
the last edition of the marathon, World Wrapper Man “the only man to
run a marathon with a wrapper” was among the contingent of the one
hundred members representing the FoodClique team that were received by
the SA to the Governor on Sports Mr Deji Tinubu at the finish line.
In
the words of the Founder of the body, Bolajoko Fadipe he stated “the
marathon will provide us an avenue to collect donations to fight hunger,
raise awareness and educate others about ending this ill in our
society.”
He further urged everyone to be part of the marathon stating “Everyone is invited to participate at the event scheduled for Saturday February 11th. Even
if you only want to walk or run at your own pace, it will be great fun
running with hunger heroes who want to help eradicate this scourge in
the land and move toward a hunger free Lagos”.
The
Access Bank Lagos City Marathon enters its second year in a row with
much fanfare in stock to eclipse the success of the previous edition.
Previous Post