0
SHARES
5
VIEWS
Share on FacebookShare on Twitter
Members
of the Lagos State House of Assembly will cut short their break and
reconvene on Monday to deliberate on the Harmonised Enviromental Bill
sent to the Assembly by the Executive. 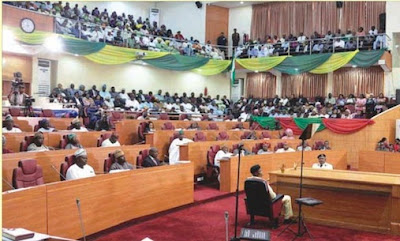 The
lawmakers are supposed to resume from their six-week break on February
28th but are compelled to return to work because of the importance of
the bill and it’s attendant contribution to good governance in the
state.
The
Chairman of the Assembly Committee on Infofmaton, Strategy and
Security, Hon. Tunde Buraimo, the lawmakers are cutting short their
break because of the urgency of the bill and thor commitment to ensuring
good givernance for the populace.
“We
are all committed to ensuring good governance and this bill which is
aimed at improving the lives of our people deserves our attention hence
we have no choice than to cut short our break and do the job,” Hon.
Buraimo said.
The
bill seeks to create a single control body for all environmental
agencies in the state for the purpose of resolving areas of conflict and
vest in the state Ministry of the Environment, the overall management
and supervision of all the agencies as well as encourage synergy and
cooperation among the agencies.
Hitherto, the state has several laws which regularise various aspects of environmental matters and protection in the state.
The
laws are: the Lagos State Environmental Protection Agency (LASEPA) law;
the Lagos State Environmental Sanitation Law; the Lagos State Waste
Management Authority (LAWMA) law; the Lagos State Signage and
Advertisement Agency (LASAA); and the Lagos State Parks and Gardens
Agency (LSOGA) law.
Previous Post