Temitope told NewsmakersNG that she was 16, when she met the popularly singer at Jubilee Estate, near Otedola Estate, at the Lagos end of the Lagos-Ibadan expressway, in 2008, and they took to each other like duck to water. Wande Coal was 23 then.

As the relationship waxed stronger, the lovebirds were seen together everywhere.

Temitope revealed that Wande Coal promised her heaven and earth, and his bed became their playground until he inadvertently scored a goal in one of the matches. 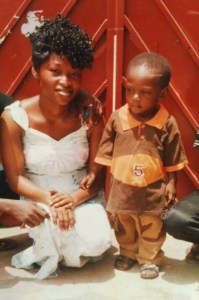 When Temitope told Wande that he was going to be a father, Wande rejected the pregnancy.

“Do you want to kill my career?” he allegedly asked Temitope.

He denied paternity of the baby and left the neighbourhood so Temitope would not see him again.

Temitope said that she went ahead with the nine-month course alone, and gave birth to a bouncing baby boy.

Supported by her family and friends, she held the naming ceremony and named her son Joseph

Joseph turned out to be a spitting image of Wande Coal.

Temitope said that people who were not even in the know also acknowledged the speaking likeness with her son and Wande Coal, when in contact with the boy.

When asked if any of Wande Coal’s friends was aware of the love affair when it was blooming, Temitope mentioned another Nigerian Pop Star, Oladapo Daniel Oyebanjo aka D’Banj.

She said, “D’Banj was aware. He was close to Wande Coal, and he was the person I first complained to when the pregnancy was rejected. D’Banj was shocked. He said ‘No, Wande cannot deny this’.”

The news of Joseph travelled round and came to the knowledge of Wande Coal and his parents. His Mother, Mrs Omolara Oluwayemisi Ojosipe, arranged to see the baby, and she was allegedly amazed at the resemblance. That was in 2010, when Joseph was just one and half years old.

Shortly after that, Wande Coal’s parents allegedly arranged for a DNA test to be done on Joseph. The result came out positive, giving them a 100 percent assurance that Joseph was actually their grandson.

NewsmakersNG learnt that Wande’s mother, however, felt that Temitope was not a good match for their ‘Superstar Son’. So, she hatched a plan.

One faithful morning, she allegedly went to the market, bought some food stuffs which she took to Temitope’s mother. She told her that she wanted her grandson to spend some time with her. She promised to take care of him, and that Temitope could come along with the child.

Temitope’s joy knew no bounds. She was happy that her son Joseph had eventually been accepted by his father and his family. She was also happy that she would be able to see Wande Coal again after a long time.

Temitope woke up, one Saturday morning, full of expectation that she would be reunited with the father of her son. With the invitation she had received, she packed clothes that would last a few days for herself and her son.

They were actually well received, she told NewsmakersNG. She was eagerly waiting for Wande’s arrival that weekend. Then his call came, Wande’s mom was talking to him on phone. When it seemed the call would soon end, Tope moved nearer just to indicate her interest in speaking to him. Wande’s mother got up, moved to her room, dragging Joseph with him, and was saying “Speak to your son,” as she entered the room with the child. Then, she slammed the door behind her, and shut Temitope out.

Temitope said that she screamed as the door hit her face and injured her nose.

Wande Coal’s mum thereafter blocked every means of communication between her son and Temitope.

Temitope said she told her: “My son cannot marry a low class woman.”

Unknown to Temitope, there was more surprises in store for her.

She was cajoled into leaving her son with Wande’s mother, who then agreed that she could come and see the child every weekend.

It turned out that she was sold a dummy. That was the last time she saw her son.

The gate man had been instructed never to open the gate for her. She called many times, but Mrs Ojosipe would not pick her call. Whenever she used a strange number, the woman would get angry and rain curses on her, telling her “never to call this line again”.

Her plea to let her see her son fell on deaf ears.

NewsmakersNG learnt that since 2010, Wande’s mum has been in custody of Joseph.

Temitope said she had spent the last eight years waking up with tears on her pillow and pain in her heart.

“Please just let me see my son,’ she begged during this interview.

When asked to speak on Temitope’s case, a human rights lawyer, Mr. Kayode Oyemakinde, said: “Temitope, should not only be allowed to see her son from time to time; she should also be compensated in cash. She dropped out of secondary school in her final year to give birth to Wande Coal’s son. She should be compensated for the trauma she suffered in the hands of Wande Coal and his mother.”

Bishop Chukwuma reveals what will happen to Buhari, Nigerians if president returns to power