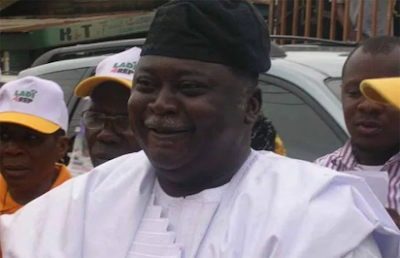 On Saturday 1st April, 2017, time stood
still in the ancient city of Ado Ekiti as over 15,000 persons thronged the
venue of the Ekiti State University 22nd Convocation Ceremonies to  witness the historic moment as Honourable
Oladipupo Olatunde Adebutu, Chairman, House Committee on Rural Development, was
conferred with the honorary degree of Doctor of Public Administration (D.P.A)
Honoris Causa by Ekiti State University, Ekiti State.
The conferment event, which took place at
the University Auditorium, Ado Ekiti, was a major highpoint of the 22nd
convocation ceremony of the university.
The Vice Chancellor of the university,
Professor Samuel Bandele said the conferment of the degree on the man who has
embraced service to humanity as his heritage was in recognition of his
“unceasing dedication to the betterment of human race.”
Speaking in the same vein, the Ekiti State
Governor, His Excellency, Ayodele Fayose described Hon. Ladi Adebutu as a
humanist per excellence and prayed for his success in his aspirations.
In his response, Hon (Dr) Ladi Adebutu said
that he had received many awards all over but that he felt most honoured by
this recognition.
Raising concerns about the parlous state of
education in Nigeria, Adebutu called on the federal and state governments to
increase the budgetary allocation to education, saying that would go a long way
in rescucitating the moribund sector. Speaking further, he opined that a new
policy roadmap and a complete overhaul of the education system must be of
significant consideration if Nigeria was to take its right spot in the comity
of Nations.
Other awardees included former Governor of
Central Bank and the Emir of Kano, Alhaji Lamido Sanusi, who was conferred with
Doctor of Finance (D.F) Honoris Causa. He was ably represented by the former
governor of Kano State, Alhaji Ibrahim Shekarau.
The Governor of Gombe State, His
Excellency, Alhaji Dakwambo, was also conferred with Doctor of Management (D.M)
Honoris Causa while the Governor of Oyo State, His Excellency, Senator Abiola
Ajimobi was conferred with Doctor of Management (D.M) Honoris Causa.
Instructively, Hon. (Dr) Ladi Adebutu is
the first Ogun State indigene to be so honoured by the university.
Previous Post

Hon. Saheed Ibile Warns Against the Crisis Between Hausa and Yoruba in Ile-Ife