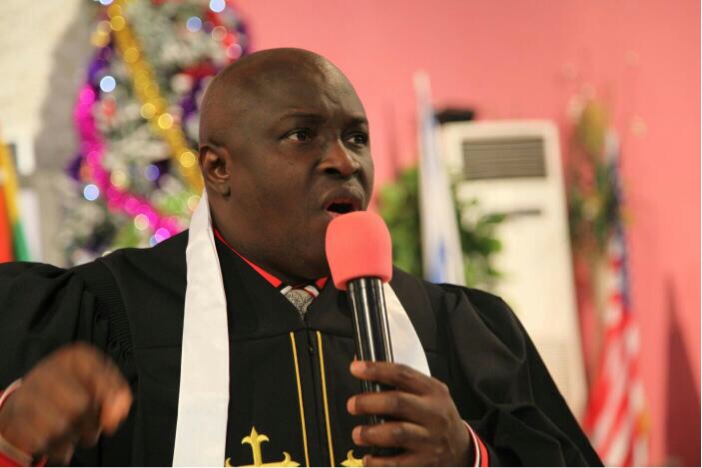 A blackmailer who claims to be a journalist has landed in Kirikiri Maximum Prison attempting to extort money from a popular clergy in Lagos through blackmail. Ohio Ojeagbase, 38, walked into the net of the Federal Special Anti-Robbery Squad, SARS, after perfecting his extortion plot on Bishop (Dr.) Chris Kwakpovwe, the General Overseer of the Manna Prayer Mountain and publisher of the daily devotional, Our Daily Manna. He was arrested alongside a Lagos-based lawyer, Barr. Uche Iloani accused of working together with Mr. Ohio who owns Probiters Report.

Trouble started for Ohio and his accomplice after they had planted a lady in Bishop Kwapovwe’s ministry to function as a staff whose job was to feed them with information that could facilitate their blackmail plans on the clergy.
Rita Ibeni, the staff, who worked in the media department of the ministry for about five years, was fingered after a massive looting of the ODM Video Unit of media and video equipment worth N5.6 million. The main suspect and other departmental staffers were arrested. When she was confronted with evidence of the theft, she absconded from the church office. This prompted her arrest at the instance of the ministry and a case was filed at Area H Police Command, Ogudu, Lagos. Upon her arrest, Barr. Iloani, who claimed to be her counsel, came forward to demand for her immediate release with a plea to the ODM and the ministry that the matter would be settled out of court.
However, as soon as Rita Ibeni was granted bail, the story took a new twist as Mr. Ohio went to work. He wrote a letter to Bishop Kwakpovwe claiming that the latter tried to oppress one of his staffers and that they were going to publish a story in that regard which could finish the ODM Vision which has affected millions of lives across the Globe. According to him, “Whatever we tell the public will be believed since we have 250 million online membership.” He demanded millions of naira from the man of God if he wanted the story killed. Ohio Ojeagbase claimed he and his accomplice had recorded verbal (audio) conversations between Rita and the bishop where the man of God made sexual advances at the former. However, further probe and forensic examination later, revealed that the recording was fake as the fabricated voice was not the bishop’s.
After series of accusations and threats to publish negative story of sexual harassment and threat to life concerning the Bishop and even threats of kidnap of his loved ones by other faceless members of the group, they demanded settlement to avoid the story going viral, claiming it was not their intention to damage the image of the revered man of God. They also told the bishop they had done a “human google” on him and they knew his worth! At that point, the bishop “smelled a rat” and quickly reported the matter to the police.
The lawyer asked for N15 million (fifteen million naira) for inconveniences tagged as professional fees and the inconveniences his ‘client’ Ms Rita Ibeni had gone through during her arrest, while Mr Ohio demanded for 50% of whatever is paid to the lawyer.
The suspects also gave the man of God the option of handing in original copies of his property documents that they would help him facilitate quick loan from a bank so he could make the payment without stress. That was when the Bishop Dr Chris Kwakpovwe went back to the police to lodge complaints. The police then advised that further calls, SMS or meetings be electronically recorded as evidence, and that was done.
They were, however, rounded up on Wednesday, April 12th, 2017 in Ogudu, Lagos, while they were at the agreed venue for the man of God to make payment. Journalists further gathered that they came on that day with two borrowed jeeps.
The case was charged to court on Thursday April 17, 2017 where the suspects were remanded at Kirikiri Maximum Prison over their inability to meet up with the bail conditions.
We gathered that Mr. Ohio had earlier blackmailed many clergymen and businessmen in the country. The suspects, according to information made available to us, were in the habit of planting people in the homes and offices of wealthy men and women, clergy men, business men and women to plan how to blackmail and extort money them eventually.
Speaking on the incident at the court premises, the bishop told journalists that he knew that this was a plot to DISTRACT him from the LOOTED VIDEO EQUIPMENT’S CASE, Blackmail/Extort money (millions) from him and discredit him as a man of God, but his proactive approach to get to the bottom before they carried out their nefarious acts stopped them in their tracks. He said he never made any advances and can never do so with the suspected looter of the video unit (the former employee). “I am used to such satanic fabrications, gang-ups, lies, concoctions and distractions! He reminded journalists of a current and lingering court case which involves a lady who took him to court for the ridiculous charge of falling down and breaking her teeth at a Lagos National Stadium programme – World Anointing Night, 6 years ago.
“Thousands of souls came for that programme from 23 countries, 6 years ago. The lady whom I never met, took me to court and she is claiming 22 million damages. The case which provoked nationwide outrage against the lady is still on.”
“As a man of God, such lies, manipulations, fabrications, temptations and battles are expected because the devil is mad and will be mad against any child of God who is living right and who is a terror to his kingdom. But he is only a roaring lion without teeth. Was Joseph not wrongfully attacked and blackmailed by Mrs Portiphar? But did he not sit on his throne at last? I have learnt that in life, success attracts uncommon battles and for every one person who celebrates your success, there are at least two others who are plotting your down fall. Indeed, there are no blue skies without storms but the rainbow is the final bus stop if you refuse to be distracted from your goals! Victory is sure by God’s grace! I shall make no deeper comments for now since the matter is before the courts.” He said.