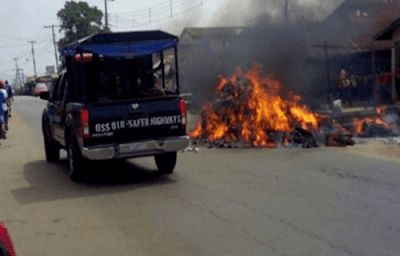 The
Inspector-General of Police, Mr. Ibrahim Idris, on Friday justified the
arrest of only suspects of Yoruba extraction over the recent clash in
Ile-Ife, Osun State, which resulted in the death of about 46 persons.
He said crime neither has tribe nor identity.
Idris
spoke with State House correspondents shortly after briefing President
Muhammadu Buhari of security situations in parts of the country inside
the Presidential Villa, Abuja.
The
police had been in the eye of the storm for arresting and parading 20
Yoruba persons, including a monarch, over the clash while not a single
Hausa/Fulani person was detained.
The
pan-Yoruba group, Afenifere; and the Oodua Peoples Congress (APC) are
among groups and individuals that have been criticising the police over
the development.
Idris,
however, said the police would not hesitate to apply the law once
criminal cases are established against individuals, irrespective of
their tribe.
He said: “You know we are police officers. Crime has no tribe. If you are a criminal, you are a criminal.
“Crime has no face. We don’t look at crime in the identity of where you are coming from.
“As far as you are a criminal and the police find you wanting, we apply the law.”
He said investigation had revealed that the crisis started with a disagreement between two people selling food along the road.
On the massacre in Zaki Biam, Benue
State, Idris said he had deployed police special units to arrest one of
the men declared wanted in connection with the case.
“We have deployed Mobile Police Unit
on 16th of this month and of recent that incident that happened at Zaki
Biam there are allegations on that Gana, one of the wanted man.
“This man has been in the police
wanted list and I now decided to deploy some special unit both
investigative to go after him and get him by all means.
“Like I said earlier, definitely, we are going to get that man,” he said.
Idris also said the latest attack was not carried out by Fulani herdsmen.
“No I don’t think its Fulani herdsmen.
It was an activity of a criminal who is using some of his criminal
gangs in the state to harass people. I have assured the governor when I
met with him few days ago,” he added.
The police boss also said the crisis in Kogi State was not about kidnapping.
He said it was a case of militants who were bent on disrupting the peace of the state.
He promised that the police would handle the situation.
Idris said he used the opportunity of
his meeting with Buhari to update him on police’s efforts to ensure
security across the country.
He
said: “The meeting was to share with the President our deployment
strategies on ground; our deployment to some of these flash points all
over the country, especially Benue which is the current one.
“We also talked about deployment to
Kaduna State which started some few weeks back and deployment to Ile-Ife
where we have a lot of police officers both special squads and
investigation team on ground to conduct investigation on the matter.”
The police boss said the President
directed him to ensure that all facilities at police’s disposal are used
to make sure that these security challenges are brought under control
as soon as possible.
He said he assured the President that he would ensure that is done.
Previous Post