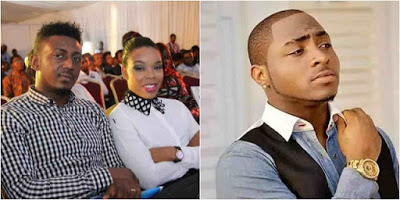 Dance queen, Kaffy, who slammed Nigerian singer,
Davido, causing an uproar on social media, has disclosed that she has
put the incident behind her because the singer allegedly begged her
husband.

The October 206 outburst came after Davido
dropped several dancers who trained and rehearsed for a concert with
him, saying he no longer wanted them to perform with him at the last
minute.

Kaffy who is married to Psquare’s official drummer, Joseph Ameh, said in her interview Punchng that;

“The
issue wasn’t really about Davido alone. It is common with a lot
of artistes who think that they are helping dancers by having them on
stage with them. But we’re the ones actually helping them because their
performances would be drab and colourless without dancers to spice
things up. Davido’s case was just the straw that broke the camel’s back
and I decided to speak up. Anyway, I have forgiven him because he
apologised to my husband.”

“I like women who twerk, but when it comes to marriage, I’ll go for intelligence” — Kiss Daniel says

“I like women who twerk, but when it comes to marriage, I’ll go for intelligence” — Kiss Daniel says